Pelotón de la Muerte Espadin is produced in of Oaxaca by mezcalero Cutberto Santiago and his family, who cook agave Espadin agave in stone pit ovens using traditional methods. This mezcal has notes of kiwi fruit, lemon zest, dried peppercorn, agave, and soft smoke. Pelotón de la Muerte is aimed at the cocktail scene and is often sold in one liter bottles.

The Pelotón de la Muerte label is the flag The Doliente Hidalgo, a banner that represented the insurgent army call “The squadron of death”, which sought revenge for the murder of the priest Miguel Hidalgo y Costilla. The red in the flag represents the blood of the leader, the black cross represents the mourning for the priest Dolores, and the bones honor his remains. Pelotón de la Muerte is from Mezcales de Leyenda and geared towards the cocktail scene. 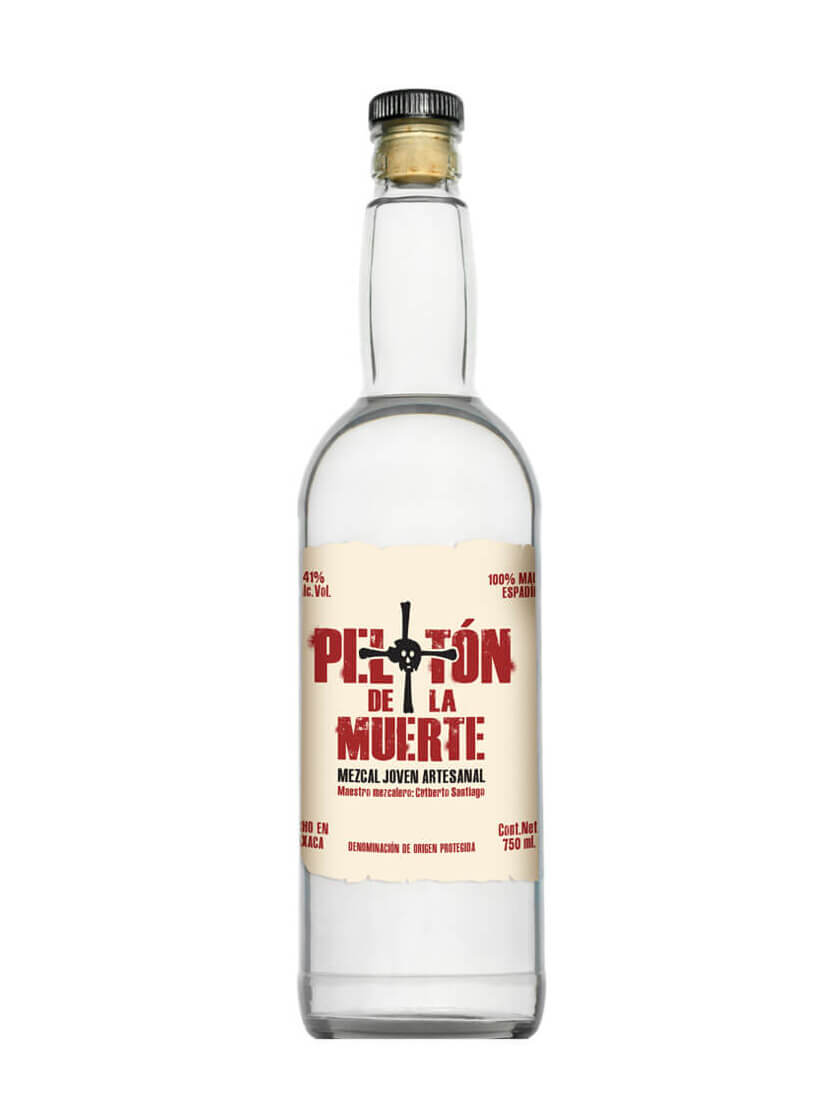 2 reviews
Rated 4 out of 5 stars7 months ago

Honeydew and kiwi on the nose with a sweet lemon cream palate. Nice smoke and hot spice on the finish but not a lot of complexity.

Smells of smoked wood, spicy almost immediately. Strong, with an unmistakable woody flavor. The wood gives it a great touch.

This was like drinking limoncello with a hint of ash and agave. Not the most interesting mezcal, but thoroughly enjoyable, especially for the price. It would make a nice mixer or dessert drink.

Lote 06CU70519. Really nice and smoky. Reminds me a bit of an Islay scotch. Some nice citrusy notes too.

I hated this the first time, the second time…and no, there wasn’t a third.

Sub anything mass produced and garbage. Doesn’t remind me of anything vaguely nice of any quality which I like about mezcal.

Wish I could give it a few negative stars.

This is a very good mezcal. I credit it with rescuing my mezcal journey from despair after too many false starts. That said, while I absolutely loved it when I first tasted it, I’ve since found some I like better.

Tasting notes: moderate smokiness throughout, with citrus/passion fruit/kiwi fruity acidity, and a low-key agave sweetness. Some slight minerality too. My bottle didn’t have any of the pungency or acetone notes that others have found.

Match made in heaven for cocktails – although it is also good sipped, particularly if you like it on the rocks. Very smokey for connoiseurs of bold mezcals

Good presentation, I like the bottle a lot – so fancy! The taste – strong, you can feel agave a lot, for me one of the best in this price range to be honest!

Lot 16CUT1118. Astringent. Sharp aromas for 40% ABV. Leathery palate with a ton of smoke. This probably a decent mixer for Smokey cocktails. Not the best for sipping neat.

Not a fan. The flavor tasted almost artificial, and extremely hot for a 41% abv mezcal.

Great value for money with this smokey and district mezcal. Its pungent flavor makes it just perfect for cocktail making. A little goes a long way, authentic taste satisfies

I agree with Tyler in that there is a punget kick that I would think would come from a mezcal in the 45-46% range. Not a fan.

Great for the money, complex. Could use less acetone however. Rate 3+. In a cocktail, it plays an appropriate role. Not bombastic nor washy, appropriate and tequila-like overall in balance. Batch variation is a seemingly large issue.

Maybe it’s my favorite mezcal. It has a lot of character to be a young mezcal, the flavors are elegant, with notes of white pepper, mineral flavors, salt, lime notes, alcoholic aroma, maguey and spicy

I just keep coming back to this one. I have more expensive and pricy options but this is just a neat sipper. I get spearmint, citrus, lite smoke, a fruity sweetness, Woods, leather, earth, pepper. Actually more complex than I expected from the cheesy logo. Worth a try you may dig it.

This is my go to mezcal to mix in cocktails. It provides a good smokiness with good value.

Notes of smoke, autumn leafs, pear, dairy and citrus. I also find some violets on the palate.

The brand tasting notes are quite accurate. There is definitely some peppercorn and lemon zest here with agave sweetness. The nose is almost a sweet tequila. There is kind of a pungent kick even at 41% which isn’t necessarily bad just surprising.