5 Sentidos Espadin-Tobaziche is a 71 liter batch (90 bottles) that was exclusively released in Texas. It was made from mature, cultivated maguey Tobaziche (agave karwinskii) and Espadin that were harvested at approximately 5,100 feet above sea level in Santa Catarina Minas. Maestro Mezcalero Tio Pedro Hernandez cooked approximately 4 Espadin and 28 Tobaziche pinas in an underground conical oven with guamuchil and encino wood for five days. The cooked agave was then hand mashed with oak mallets before being allowed to ferment in one pine vat with well water for 13 days. It was then double distilled in 2 clay pot stills in August of 2018. 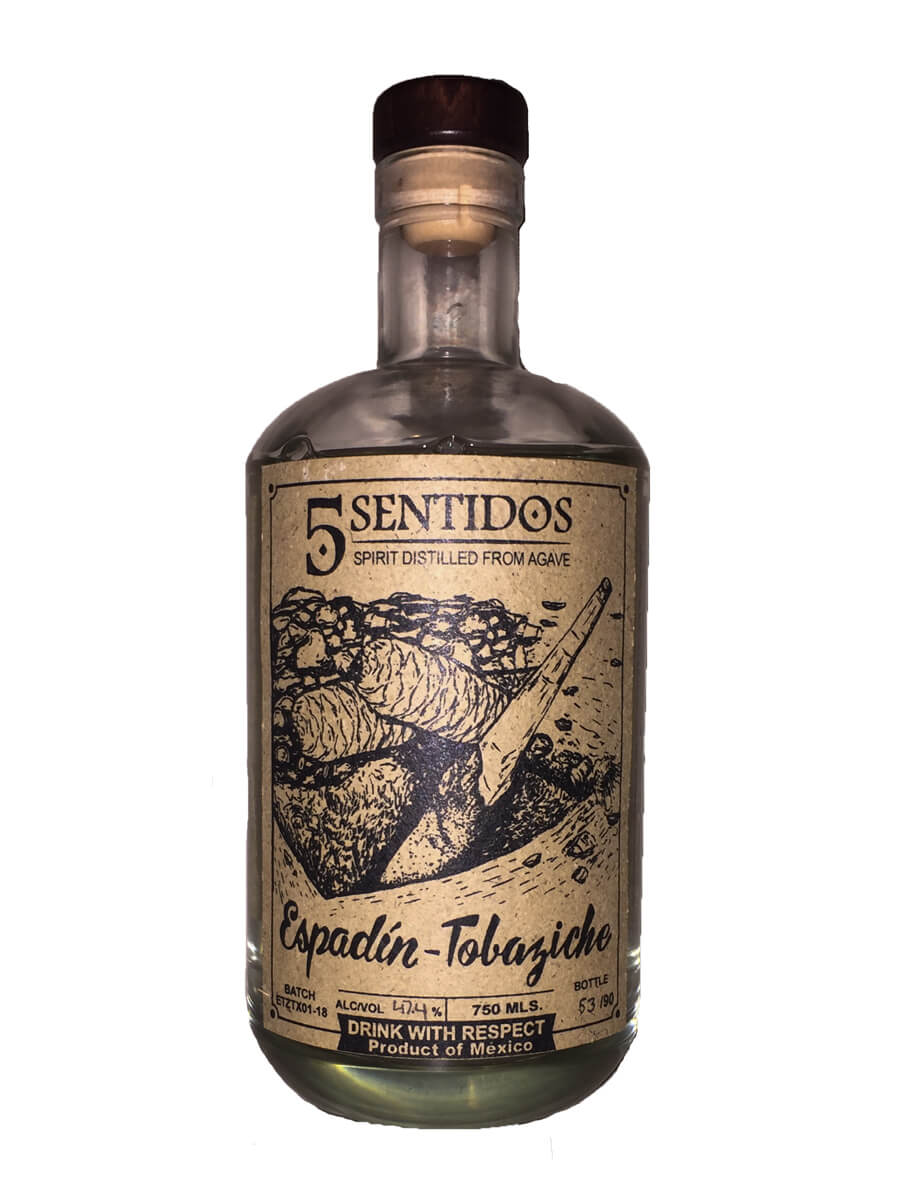 Initial nasal impact has a slight prickle and warming.
Bright grapefruit and raisins on the aroma.
Mouthfeel is oily with generous alcohol.
BBQ brisket, some cocoa powder, wet forest and clay. Finish is med – long.
Overall impression is satisfying, but 5 Sentidos has better. Tasted at a restaurant, note sure of bottle info

Palate – A pleasant charred beef note. Fruity. Mesquite and clay in the finish. Honest punch for 50.7% ABV. I dig it!!!

Batch ETZTX01-18. I enjoyed this one. It was a good blend that left little to be desired. Great job as usual from 5S

Really interesting. The clay and funk really plays nice with the pepper notes.

Soil and raisins with a clean finish. Lacking complexity and a thin mouth feel would be the only criticism. Very nice though.

ETZTX01-18 This one had a waxy smell like crayons that translated into the taste. Once we recognized that it became really distracting to taste anything else. There was a raw chili flavor like Thai brds-eye chilies, and some bitter cacao and grapefruit pith. A rare miss by one of my favorite producers who have set the bar for agave spirits so high.

Really nice! Starts off with bubble gum and an initial sweetness. Opens up with faint brisket flavors and cooked artichoke. Nice finish with slightly astringent wet dirt that I assume is from the clay distillation. Look forward to more of these very small batches from Tío Pedro Hernández

Interesting. Brisket bbq and tobacco with some decent smoke. Not overly complex but different.

Not sure yet if my jam

Batch ETZTX01-18. Incredible! Pungent aromas of dates, wet leaves, raisins, and a touch of lactose. The palate has a fruity bite up front, moving into notes of leather, tobacco, grilled broccoli, smoked potato skins, and brisket. This is really, really nice all the way through with a long finish. It keeps opening up more and more each time I uncork the bottle, so I think it might have a bit more settling ahead of it, which is exciting because it’s already stellar.