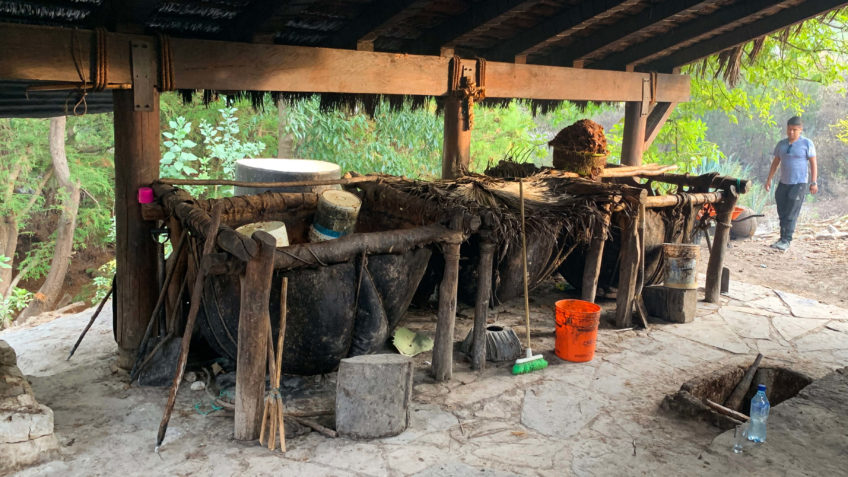 Cinco Sentidos and the Alvarez Family

We met up with Jason for breakfast in Oaxaca City before heading out to visit Amando. While at breakfast, we asked him how he’d first met Amando Alvarez. When Jason and his business partner originally built the El Destilado bar and restaurant, he told us, they did a roadtrip to Jalisco. On the trip, they ended up meeting Pedro Jimenez, who asked them if they had ever heard of mezcal from Ixcatlan. At the time, they had not, so Pedro showed them this YouTube video, which showcases some of the regional differences of Ixcatlan mezcal production, like rawhide fermentation:

Once they returned to Oaxaca, Jason went to Santa Maria Ixcatlan to see it for himself. He tried some of the mezcal available in the town, and his favorite ended up being made by Amando Alvarez’s father, Alvarado. Alvarado took Jason down to their palenque, which was under construction at the time, but the clay pots and leather fermention sacks were all there. Seeing the setup and tasting the mezcal, Jason realized it was something really special that he wanted to promote. On his next visit to Ixcatlan a few weeks later, Jason met Amando. They all began working together very quickly and Amando’s dad’s Papalometl (Potatorum) was one of the first mezcales ever bottled and sold at El Destilado.

Now both Amando and Alvarado have been bottled by Cinco Sentidos, but Amando is currently more active and thus more commonly bottled for distribution. Of the batches of Cinco Sentidos Papalometl that have made it to the US as of the writing of this blog, only batch PM03 was made by the father. 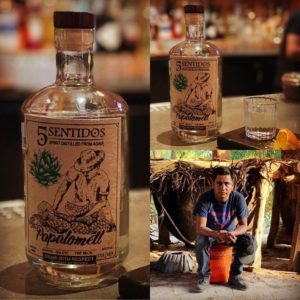 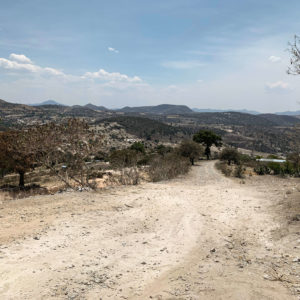 The Road to Santa Maria Ixcatlan

We walked over to El Destilado after breakfast. Jason was busy that day and Carlos, who works at El Destilado and helps with the Cinco Sentidos brand, would be taking us to visit Amando. We’d met Carlos a few nights earlier while he was bartending at El Destilado. He’d served us some incredible mezcal and we’d had some great conversation with two guys named Barry and Larry, who seemed to love mezcal as much as us.

Carlos was waiting for us at El Destilado that morning. We jumped into his pickup truck and headed north. We’d be picking up a new Cinco Sentidos batch from Amando that day, so the bed of the truck was full of empty containers. The town of Santa Maria Ixcatlan is only about three hours outside of Oaxaca City, up near the border with the state of Puebla, but the roads up into the mountains are treacherous and seem somewhat undefined at times, like you’re driving through people’s backyards, fields, and gardens.

While on the road, we got to know Carlos a bit more. He’s young, energetic, and super knowledgeable about agave and agave spirits. He’d originally become interested in mezcal through a professor in an art class. After graduation, he’d started hanging around El Destilado as a customer, before the full restaurant opened, when it was a small tasting room only. Eventually, Jason hired him and he worked his way up to a bartender position. Jason described him as “swiss army knife,” because Carlos is seemingly capable of doing just about anything.

After a rough and bumpy ride through the mountainous dirt roads, we arrived at the small town of Santa Maria Ixcatlan. The municipality is approximately 5,500 feet above sea level and has a population of somewhere around 500 people. The town, like several other small, semi-isolated, rural communities in Mexico, was once home to a culture and language all it’s own. The Alvarez family are some of the few fighting fiercely to keep these unique cultural traditions alive. Today, Amando is one of only seven people who can speak the Ixcateco language, which belongs to the Popolocan branch of the Oto-manguean language family.

While Amando regularly produces for Cinco Sentidos, he also bottles his mezcal under his own brand, which is aptly named Ixcateco. Amando is just 28 years old, but he comes from a long line of mezcal producers in this family. By his mother, Amando is a 6th generation mezcalero. By his father, he is a 4th generation mezcalero. After spending most of his childhood at his father’s palenque, Amando distilled his first batch at the age of fifteen.

Amando is actively engaged in continuing the cultural norms of the region, and he’s become an advocate for the rights of mezcal producers throughout Oaxaca. As Amando stated in this New Yorker article from 2016, “I want to fight for the rights of the mezcaleros to respect the right traditions.” For him, as for many other mezcaleros, the practice of traditional mezcal production is more than the simple creation of a great spirit. It’s an extension of a culture and a history, which in the case of Santa Maria Ixcatlan, are quickly vanishing.

While Amando is keeping the Ixcateco traditions alive, he’s also done some extensive travelling and has a worldly outlook. He’s never been to the US (his Visa was denied), but he told us a story about spending some time in Italy. When we asked him if he liked Italian food, he said he preferred the food in Mexico. When we asked him if he liked the country of Italy, he simply said “I missed having good tortillas.” 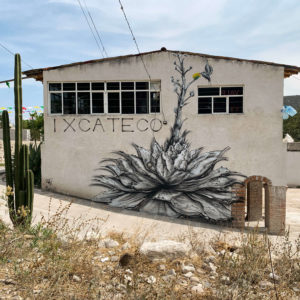 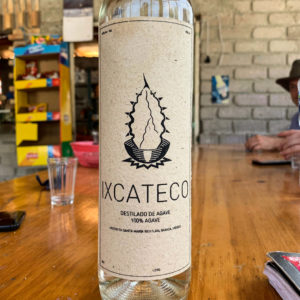 A bottle of Amando’s brand that he sells locally

In addition to picking up a new batch of Amando’s mezcal for the restaurant, it was also an exciting day because Amando had received a shipment of Agave Papalote (Cupreata) from Puebla that morning. The agave had been planted years ago by the Puebla government, who thought they were planting Espadin at the time. Their mistake was Amando’s gain. He planned to have us help him start to cook it that afternoon.

While the Alvarez house is located on a main junction in the town center, their palenque is about a 10 minute drive away, located outside the tiny town, down a dirt road on the side of a hill that faces out toward a massive sprawling valley on the edge of a bio-preserve. Several other mezcaleros also rent space at the Alvarez palenque to make their own mezcal.

We arrived at the palenque and gathered around one of the three very small underground pit ovens that sit slightly above the rest of the palenque on the hill. We immediately started cutting the raw agave pinas in half and laying them in the underground pit oven that had been pre-heating for most of the day. Once the oven was loaded up to four or five feet above the ground, Amando used palm leaves to cover the agave in the oven, and then dirt was thrown on top of the palm leaves to insulate the oven. The palm leaves keep dirt from contacting the agave while the agave roast underground for several days. 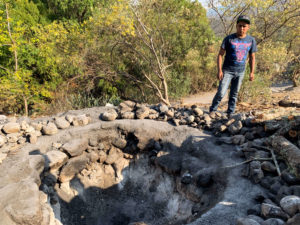 Amando next to his oven before adding the agave 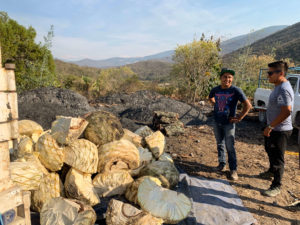 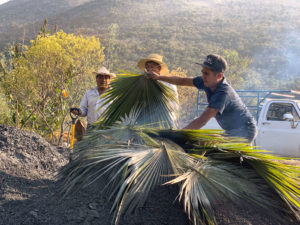 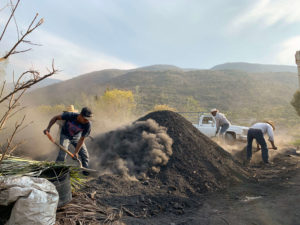 Amando burying the oven full of agave, ready to cook for several days

With the oven set to cook for the next several days, we all meandered down to the small lean-to-type structure where Amando does his fermentation and distillation. The entire setup was small but impressive. The whole lean-to was probably about 20ft by 30ft with another small (mostly empty) covered area next to it. There were a few tiny clay pot stills that were activity distilling, with fresh cold spring water running to each individual still via a series of bamboo aqueducts that ran from the spring in the side of the hill. It was incredible to see the ingenuity and design of how this water was directed to continuously flow throughout the palenque.

Near the tiny clay pot stills were three cowhides full of bubbling agave fibers that were actively fermenting with naturally occurring air-borne yeasts. While the rich smell of agave was in the air, the cowhides were mostly devoid of any of the dead-animal-type scents that I’d expected to be prominent. Many of Amando’s batches of mezcal have subtle meaty and leathery flavor notes, and I’d expected that these scents would dominate the palenque, but that wasn’t the case. Amando told us that the hides can last a long time. One of them that he’s currently using is nine years old, with all the yeast and other microbes from previous batches living in the skins and making their impact on each new batch of fermenting agave. All of his mezcals are fermented in the rawhides, but they now have a single wooden tina that can be used for additional fermentation if the three rawhides are full.

There aren’t many other brands bottling mezcal from Ixcatlan. Of the few we’ve seen, they label this type of fermentation rawhide fermentation, cowhide fermentation, or even bovine fermentation. Whatever you want to call it, it’s pretty cool, and it’s undeniable that there’s an impact on the flavor and character of the mezcal that is produced in such a fashion. If you ever taste mezcal that was fermented in cowhides, there’s a good chance that it was made by Amando or someone else in the Ixcatlan community who is renting space at the Alvarez palenque. This practice of fermentation is very rare nowadays, and like many traditions of Ixcatlan, Amando is one of the few fighting to keep it alive. 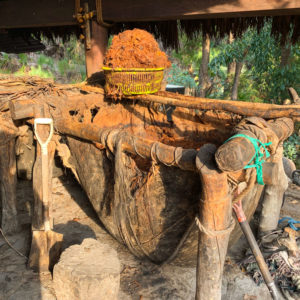 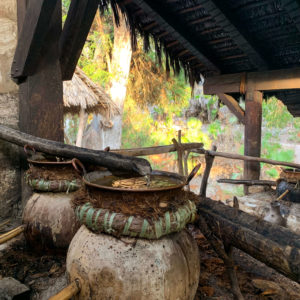 Visiting Amando and the Alvarez family was a very different experience from most of the other palenque visits we’ve done in the past. Most of the producers we visit are old, and while there are often younger members of their families who may take over the mezcal traditions, it’s clear that there is a torch that needs to be passed. There’s a sense that an era is coming to an end, and the next generation might not have the same gusto or passion. That’s not the case with the Alvarez family. While Amando’s father is still producing, much of the focus has already shifted to young Amando. The torch has already been passed and the new torch bearer is lighting a path toward a bright future, not just for the traditions of Santa Maria Ixcatlan, but for mezcal as a whole. He’s an indication of what mezcal might look like in twenty or thirty years, with the traditions of the past brought to the forefront with new energy and life. The next generation mezcalero is here and his mezcal tastes great.

Agreed – thank you for sharing! Know of any other bottles / mezcaleros in 5 Sentidos that ferment in rawhide?

It’s just Amando and his father

Great write up and glad you were able to experience this as well. One of if not the most impressive ancestral fermentation/ still setups I’ve witnessed. Salud! 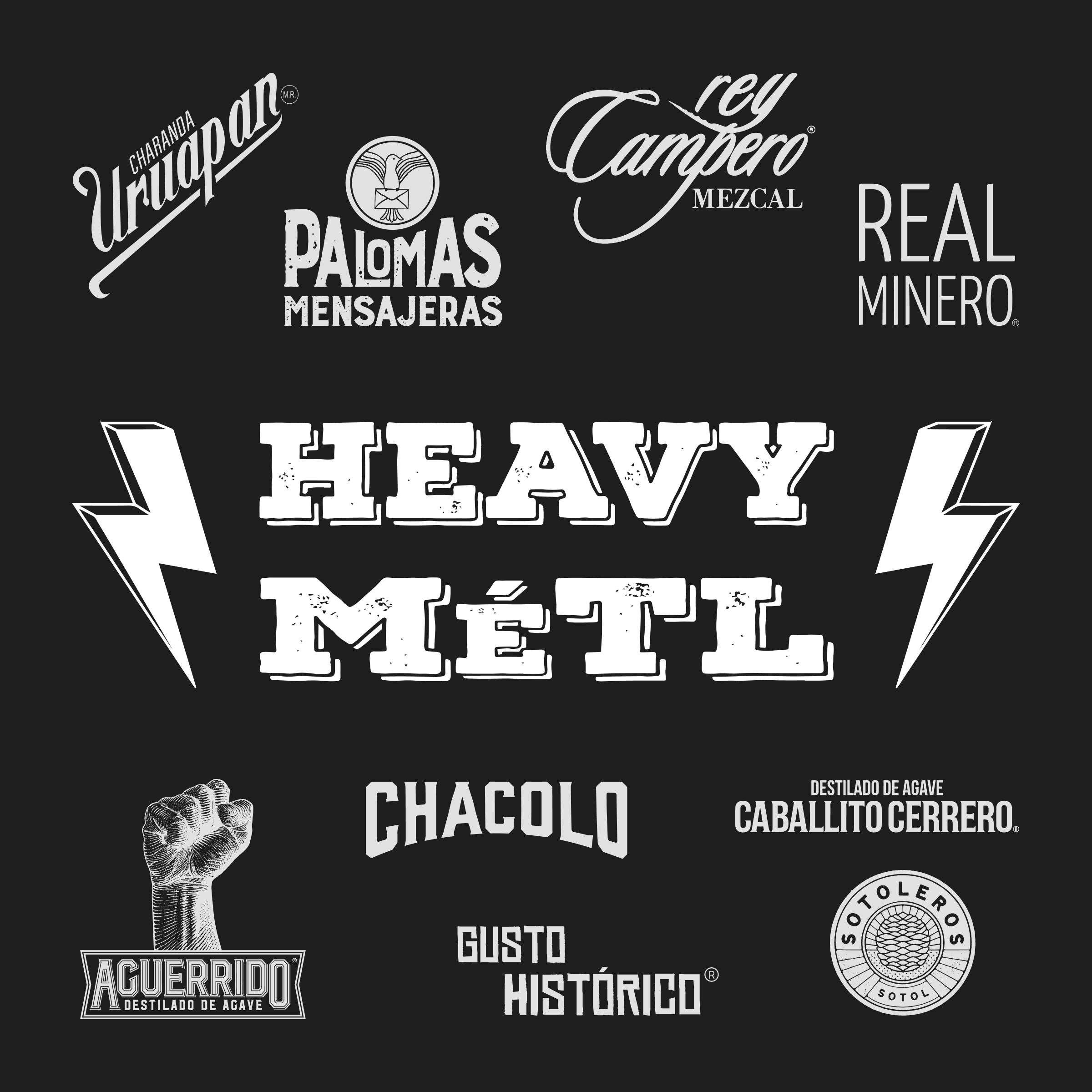