This batch from March of 2020 is only the third time Lalo has made a mezcla of tobalá-tobasiche. As he explained it, in the past, people in Minas never mixed tobalá with other magueyes. Not only was it relatively rare compared with the other local varieties, but tobalá mezcal was particularly prized for its medicinal properties.

Three years ago, Lalo and his team accidentally harvested a bit too much tobalá – more than they needed to fill the oven they were planning to cook. Rather than making a second, smaller batch of tobalá, he decided it would be interesting to to cook it with some tobasiche. The result was his new favorite mezcla.

“By my way of thinking” Lalo said, “ I don’t like to make mezclas with more than 3 types of maguey. More than that, and it’s hard to appreciate all of the distinct flavors and sensations of each plant. The aromas and flavors don’t represent the magueyes that are on the bottle’s label.”

When it comes to this specific batch, Lalo says, the two agaves combine in a very special way, “you get the creaminess of the tobalá, and the dryness of the tobasiche. Let it sit in the glass for 10 or 15 minutes, and the smells are so interesting. You take a sip, and both of the magueyes are there. This year, we made it 60/40 tobalá/tobasiche, but in the past and the future, the proportions will be different.

“It was an accident, but that’s everything in life, no?” 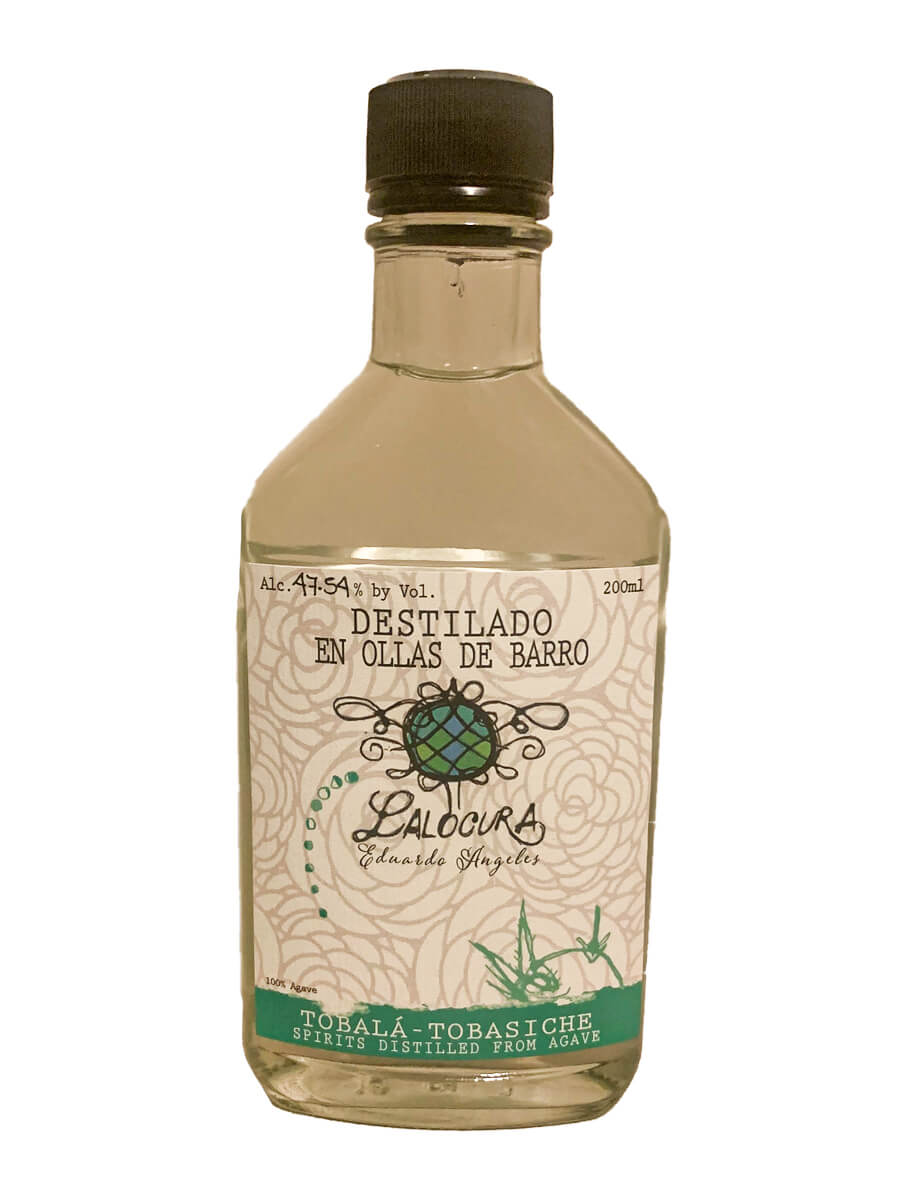 Nose: Mmmmm… white chocolate dipped waffle cones! Wow, that was a nearly immediate association! Getting a little more herbaceous and chicory driven. Good yeast play in there, giving a “lightly toasted whole grain bread with a small amount of butter on it” vibe that we’ll find in the below two expressions to varying degrees as well. Some nice caramelization notes on the agave, some earthy spices, boiled potato and its skins, light roasted almond. Even more fruit now, papaya and orange slices and wild strawberries.

Thoughts: Great development, entry is top notch, texture is initally grand, then all the things that sometimes distract me with clay distilled products clobber over the finish.

Top-notch entry to the palate, loads of complexity.

Nose: Mmmmm… white chocolate dipped waffle cones! Wow, that was a nearly immediate association! Getting a little more herbaceous and chicory driven. Good yeast play in there, giving a “lightly toasted whole grain bread with a small amount of butter on it” vibe that we’ll find in the below two expressions to varying degrees as well. Some nice caramelization notes on the agave, some earthy spices, boiled potato and its skins, light roasted almond. Even more fruit now, papaya and orange sli

Batch from 2020, bottle 20/72. This was part of the agave mixtape, I tried it with the lalocuras from vol 3&4 and this was my favorite of the 3. Lalo’s stand alone tobala and tobasiche are amazing so this on paper is a a great combo but doesn’t blow me away. The nose is great, I get wild berries and cream. The palate isn’t too complex, I get key limes and some grass. The dry finish isn’t my favorite part.

Tobala/Tobasiche 2020. Aromas of wet earth and leaves mixing with blueberries, red raspberries, and nearly ripe (but not yet) strawberries. There’s a creaminess on the nose as well. The palate has a lot of dark chocolate with raspberries, newly tanned leather, and chocolate milk. Very gentle and complex.

Sweet initially with plenty of honey, berry and a touch of vanilla before the savory returns. Rich braised beef, some blue cheese, a hint of garlic and faint salinity.

Excellent combination of notes here continuing to demonstrate what a lovely pair these two magueys can be.

Really fragrant and strong nose, fills the whole room up with mossy, damp notes, jolly ranchers and fresh rain. Palate has some notes of malt, citrus and white pepper.

Clay funk! Wet leather on smell that carries throughout the taste. Earthy with pleasant greenness at the end. Not as sweet as I’d expect from 60% tobala, and overall this one doesn’t seem to be for me. Agave Mixtape Vol 2.

Palate: Creamy and some funky cheese notes. Great licorice bite and a gentle wave of sweetness. Earthy, limestone finish. All this works exceptionally together – very well-balanced.

Even though this is 60% tobala, I get more of the tobaziche, to be honest. Stone fruit and rock candy.. classic karwinskii for me. Didnt blow my socks off, but another fine mezcal from Lalo

One of my all time favorites from Lalo. It gives the impression of great complexity but is so well balanced that it is difficult to separate individual tasting notes. I taste tarragon, anise , incense, and sandalwood, but beyond that I just taste this deep rich amazing savory singular creation. A work of art.
After several tastings I now get this umami flavor that reminds me of fresh anchovies! I need a bigger bottle!!

Pretty awesome. Like the notes say, the Tobala (Oregón – shade grown) provides a nice backdrop for the dry Karwinskii. The flavors are rustic – dehydrated fruit, raw green beans, oak, and green apple skins. This is a bit dark and brooding. Lalo makes quality spirits. My rating might go up after letting this open up and trying it again later. 47.54% ABV from Agave Mixtape Vol 2.