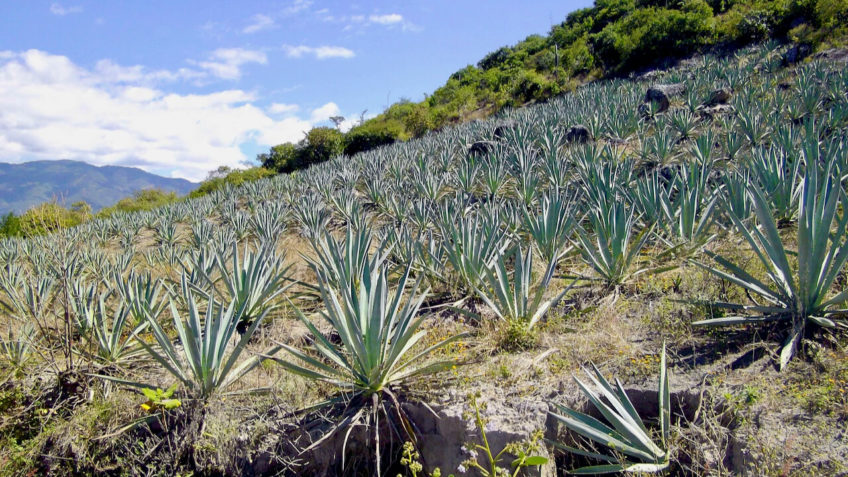 This is a guest blog post from our friend Alvin Starkman, M.A., J.D.

One distills ancestral mezcal, while the other makes the more traditional artesanal (artisanal) spirit. They live and work in different districts of the state of Oaxaca, and their generational backgrounds, personalities and lifestyles are rather different. But a common thread which binds is that they have never allowed family distillation methods to constrain them. They think somewhat outside the box, albeit in divergent manners. And in so doing each in his own way improves efficiency.

This article presupposes that the reader either (a) has been to Oaxaca and seen both types of palenques in operation and understands the broad strokes of how they typically function, or (b) has read and/or seen enough videos or documentaries to understand how each of ancestral clay pot distillation and artesanal copper alembic production works; and their distillery configurations. While of course the palenques of Jose Alberto Pablo and Rodolfo López Sosa are not entirely unique, each does significantly deviate from what continues to be the village norm. One might say that each distills to a different drummer.

José Alberto Pablo hails from a village in Oaxaca’s Zimatlán district, namely San Bernardo Mixtepec, where for generations tradition has dictated, and still does today, condensing in laminated metal as opposed to copper or stainless steel. The result is a mezcal which is amber in color, caused by the rust which forms on the laminate. However, Consejo Regulador del Mezcal (CRM), the main regulatory board for this agave distillate, will not certify his mezcal because of the chemical compounds detected in laboratory testing. If he continues to produce the mezcal his fellow villagers demand, with the rust, he cannot sell that mezcal as certified. And so now on the cusp of certification, José Alberto, still relying on sales to locals, continues to use laminate, but also employs both stainless and copper condensers. He prefers the taste produced when using the stainless. He switches between the two as he wishes, but his staple remains an agave distillate produced using a laminated metal condenser. And over time, given that “rust never sleeps,” his traditional mezcal takes on an even deeper tone, eventually arriving at orange, after which time as a consequence of use a new condenser must be employed. 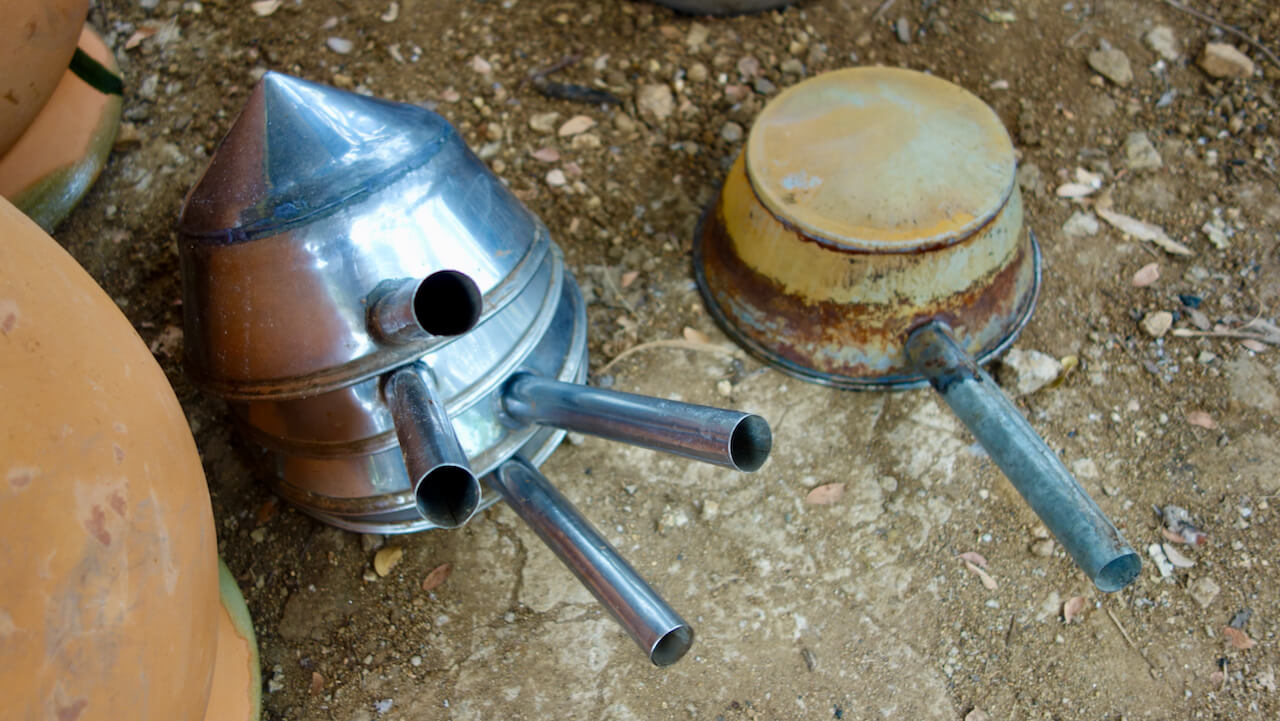 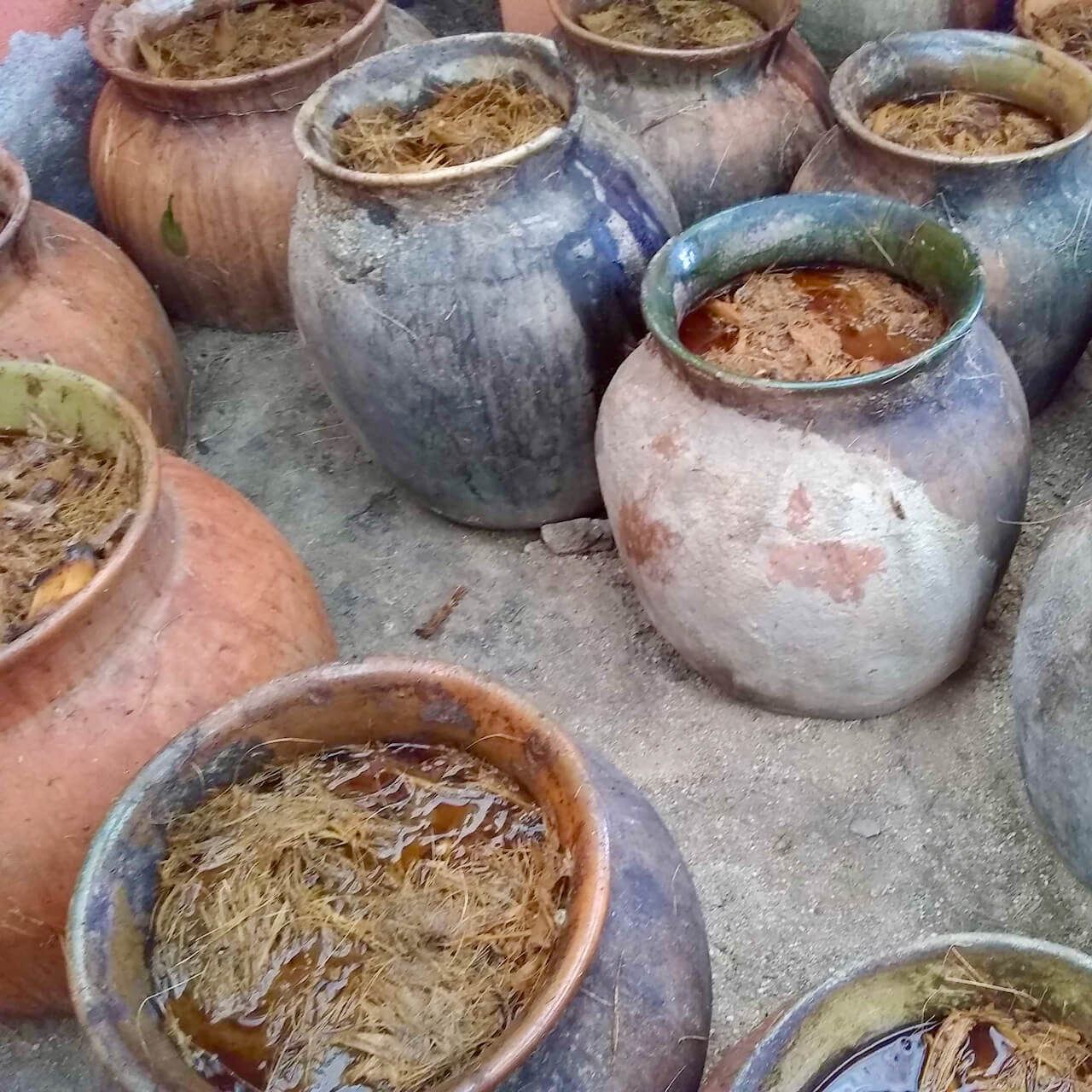 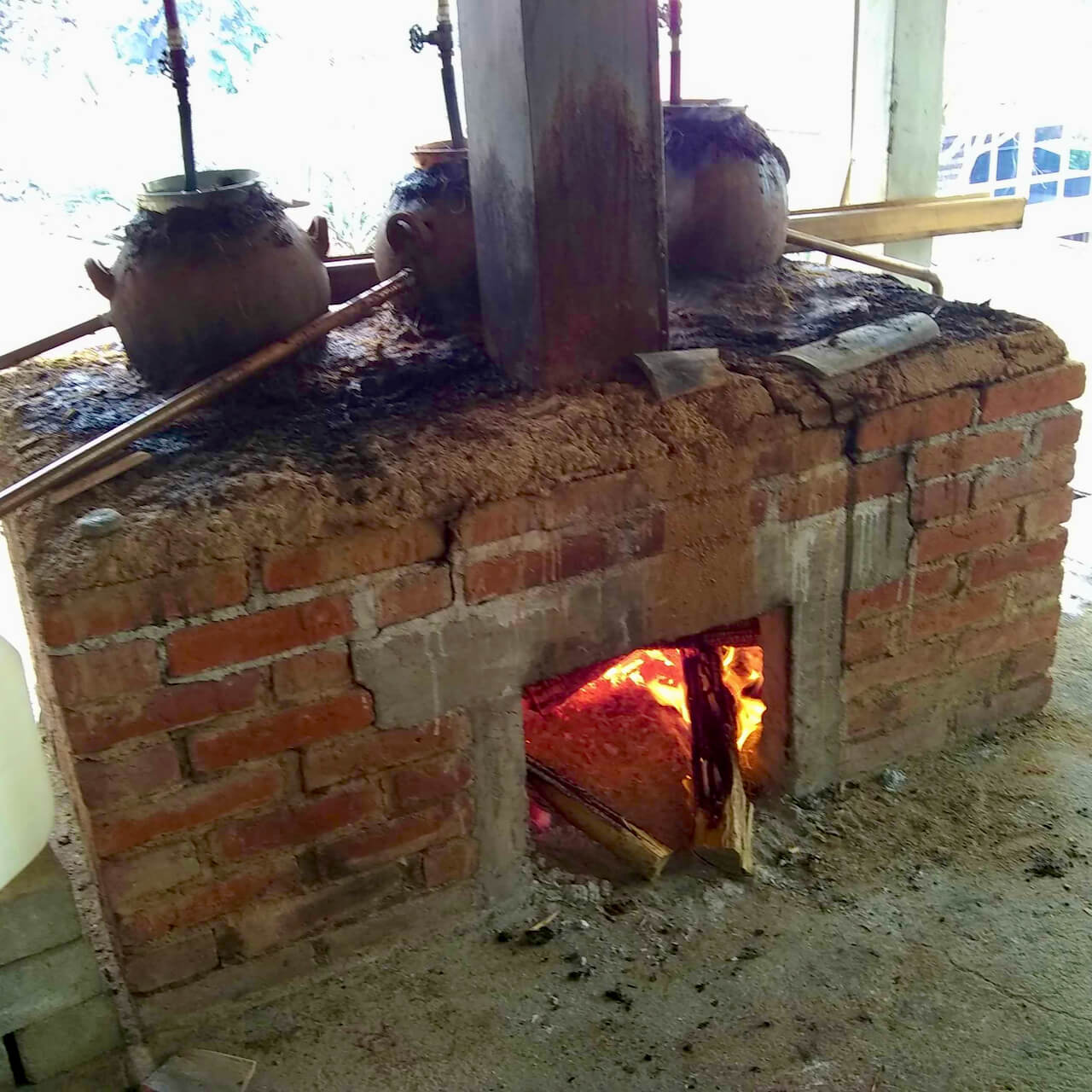 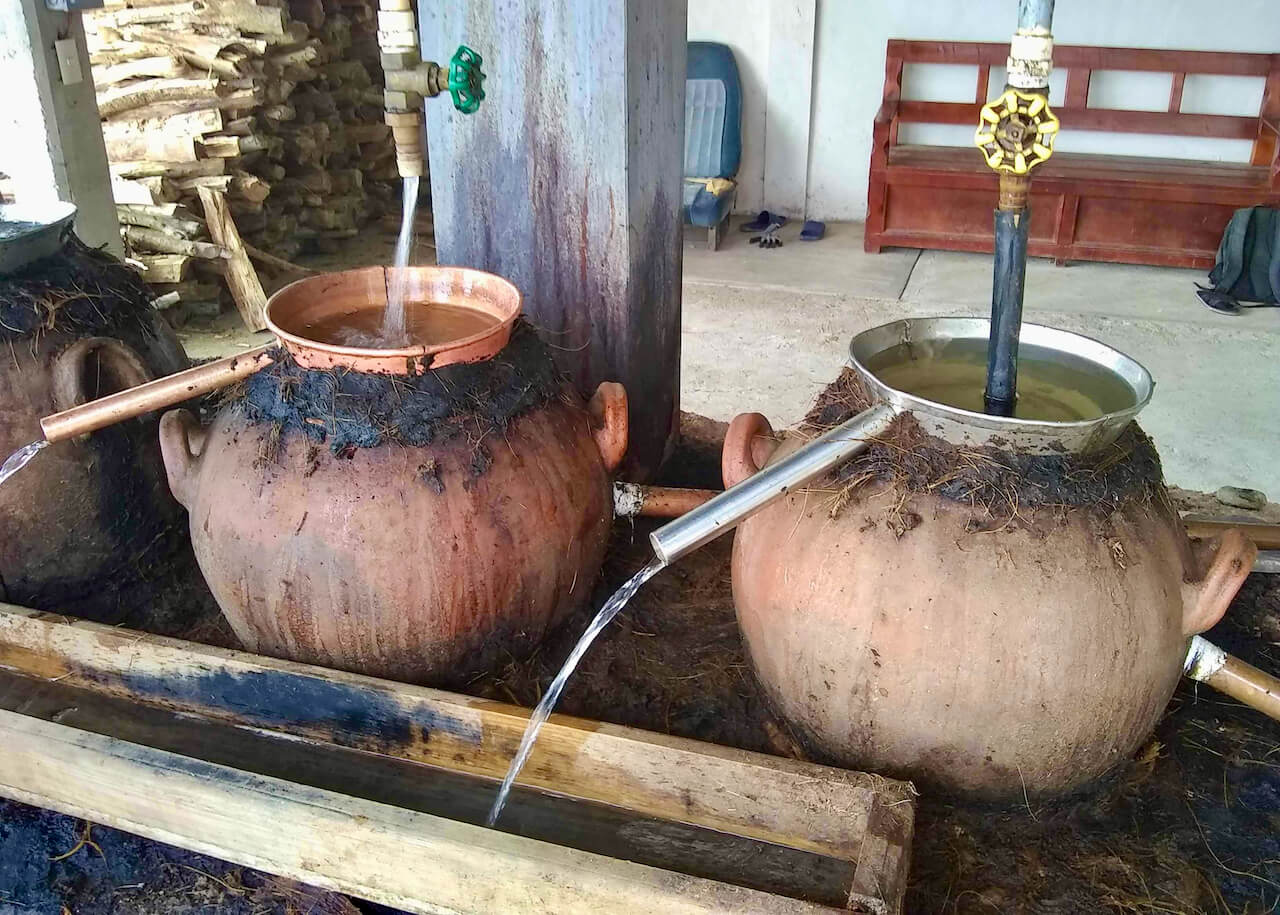 But the more significant uniqueness of José Alberto’s operation is found elsewhere. Fermenting in clay pots is not particularly unusual. However while others in his village keep their ollas de barro outdoors, this young maestro constructed a room in which the fermentation pots are situated. They are still exposed to the airborne yeasts of the area, but José Alberto has a distinct advantage over his fellow palenqueros. Not only does the tepache (mash of liquid and fiber) heat up quicker indoors than if the pots were outside, but the fermentation process occurs faster also because the roof material allows the sun to partially penetrate, particularly important during the cold weather months. And during the rainy season he doesn’t have to cover the pots as other villagers do.

While José Alberto’s still configuration and apparatus have a couple of small unassuming yet unique design features, two characteristics are particularly noteworthy: 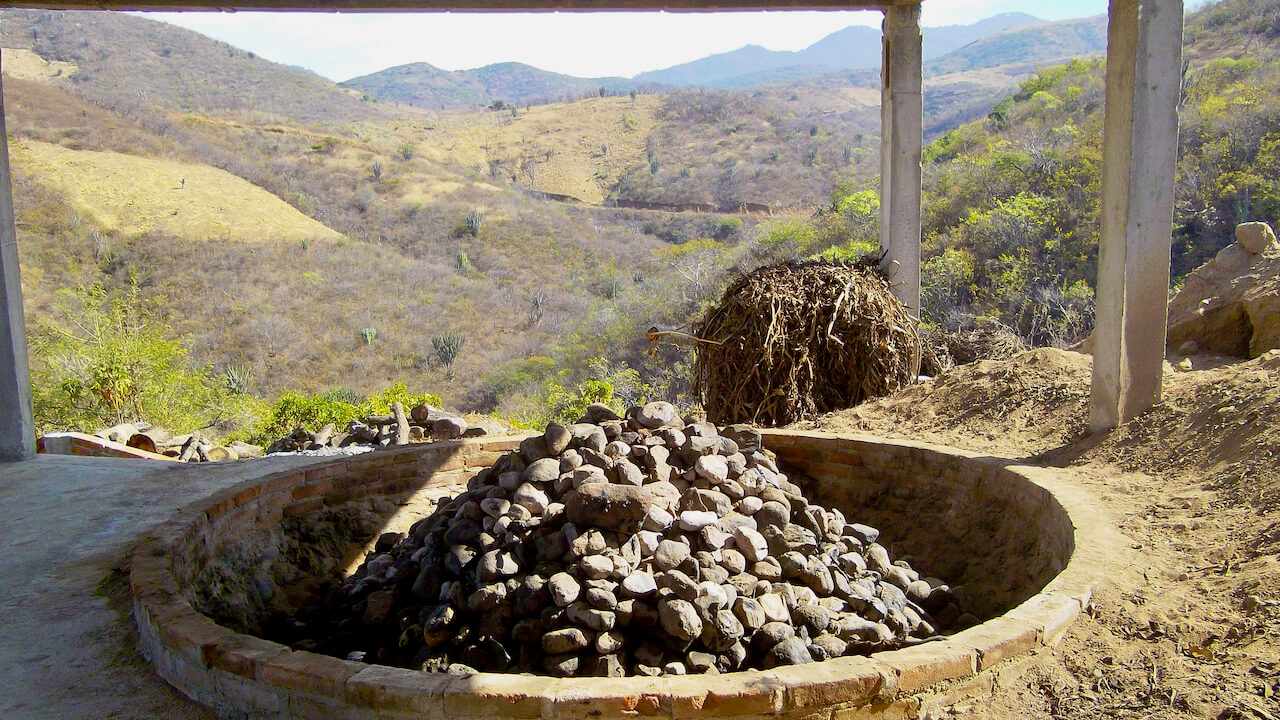 Rodolfo López Sosa’s oven with rocks that remain in place

Rodolfo López Sosa’s wife thought he had succumbed to premature senility when he told her he wanted to build his palenque not close to the shore of the river running through his village of San Juan del Río as his fellow distillers had done, but rather high up in the mountains overlooking the residential and commercial area far down below. He draws his water from a spring water source even much higher up from his palenque. The airborne yeasts are indeed different at his palenque, but the more significant feature is the water quality, distinct from that sourced by the rest of the mezcal producers, the majority of whom draw the lifeblood of production from the river or a shore well.

The recently retired teacher, now alcalde (chief judicial officer or magistrate) of the village, is similar to José Alberto in that he does not assume that the way his forebears have done things and his father has taught is necessarily the best way. Naturally some courses of action should not be trampled. One is the type of maguey (agave) used to distill. The microclimate is highly suited to growing Agave angustifolia Haw (espadín). [In José Alberto’s case it’s lumbre.] So while Rodolfo occasionally sources maguey from further afield as do others, his preference is to stick to espadín. So how does he achieve an assortment of aromas, flavor profiles and finishes, if not via aging in oak?

Rodolfo has a knack for achieving diversity by distilling with a variety of different fruits, herbs and other products of nature during the second pass-through, that is when distilling the shishe. Ah, but you say he’s just making a vegan pechuga. No, and in fact when he does a third distillation for his pechugas, he often uses only turkey breast with nary a fruit or herb, or adds a very limited number of additional ingredients. This is distinct from, for example, the traditional recipes employed in towns and villages such as Santa Catarina Minas, San Baltazar Chichicapam and Santiago Matatlán. And when he does add something foreign to the still, typically it is a single additional ingredient. Rejecting the usual cacophony of flavors emerging from a pechuga in favor of using only one or two external ingredients results in a more subtle agave distillate with only a hint of what he adds emerging. Rodolfo and I are ad idem when it comes to the result we seek to achieve in our distillates, and so for those two (and other) reasons, when I consider a particular recipe, he’s my go-to palenquero to bring it to fruition.

Question: How does one avoid the arduous task of removing the rocks from the oven before commencing the next bake?

Answer: By not removing the rocks. In Rodolfo’s world, the mound of rocks is permanently placed on a platform which includes special order clay bricks. At the back of his oven, there’s a staircase leading downwards, to a brick and mud wall, the other side of which is where the firewood is inserted under the platform. And so just prior to the subsequent bake, in the course of 10-15 minutes Rodolfo takes apart the wall, then removes the charcoal if he so desires, places fresh firewood, and again taking no more than 15 or so minutes seals the wall with the bricks and mortar. 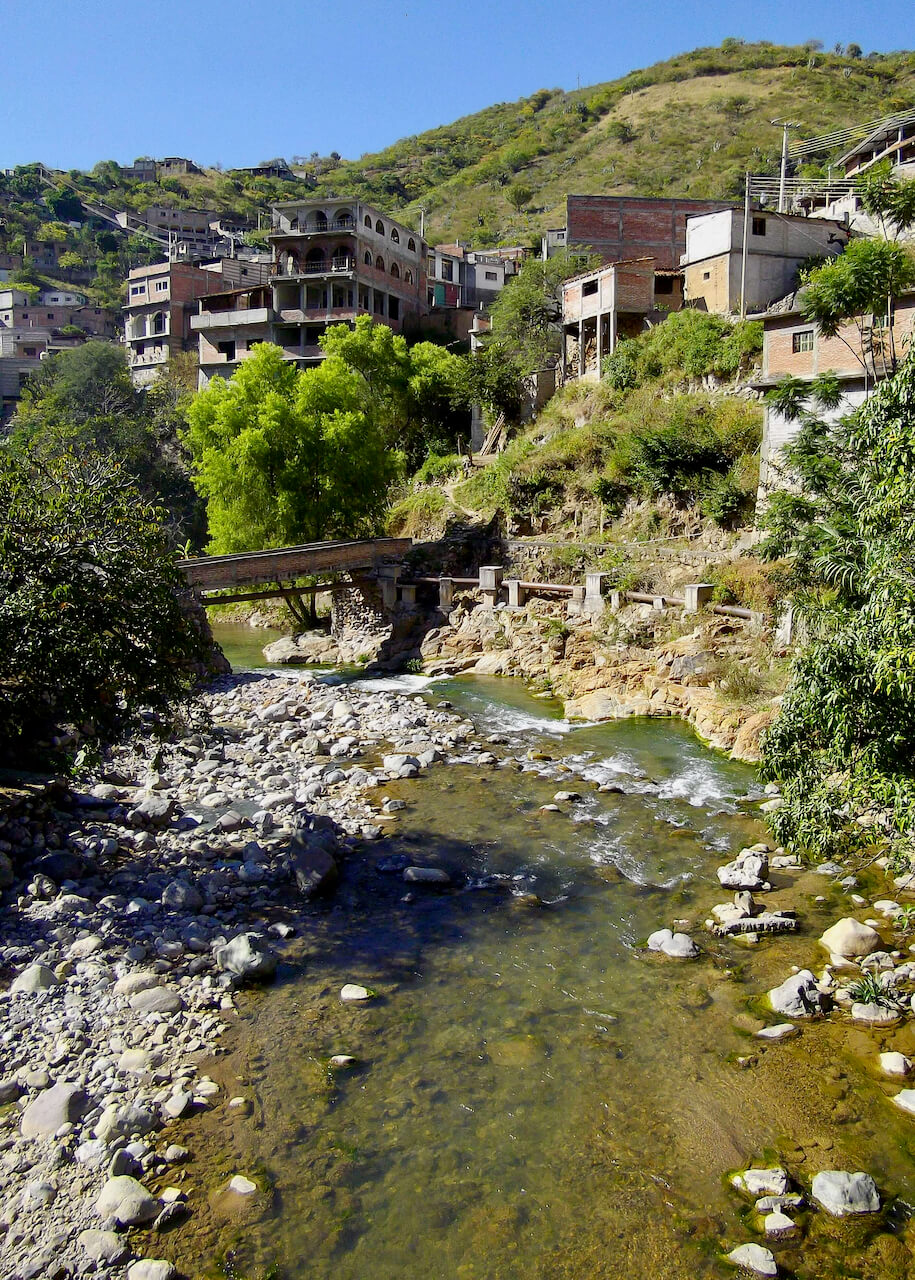 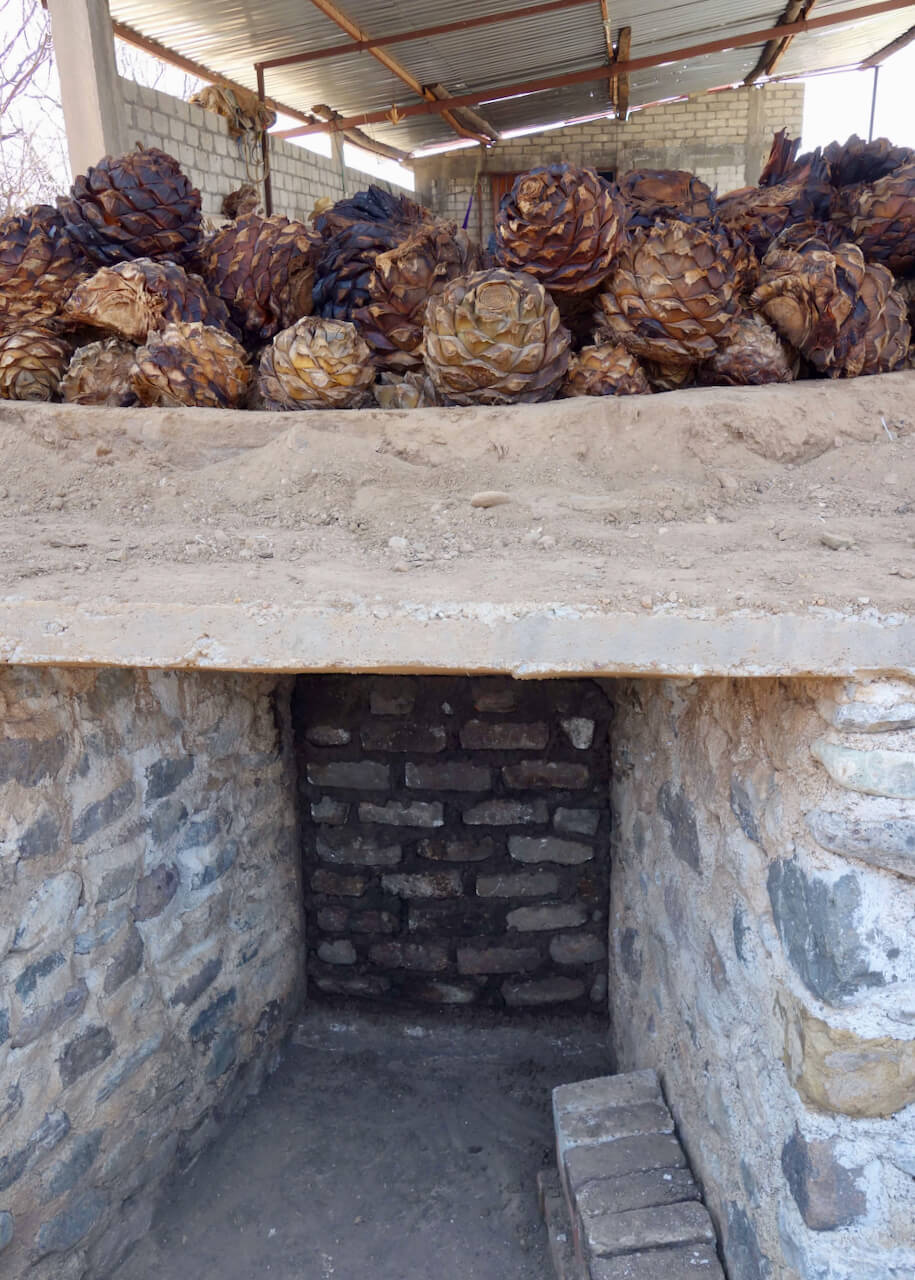 Rodolfo’s sealed entrance to where firewood is placed

Why most others do not adapt what Newton has taught is not germane to this essay. But how Rodolfo has done so certainly is. In the usual course of crushing, once the horse, mule or team of oxen has finished, one pitches the bazago into a wheelbarrow, walks it up a plank of lumber and then dumps it into a wooden fermentation vat, or worse, alone or with someone’s assistance lifts the wheelbarrow and them dumps the contents. Then at the end of the day’s crushing and lugging, the accumulated liquid is swept into a depression, gathered into a pot and finally emptied into the vat containing the bagazo. Alas Rodolfo’s method stands in stark contrast.

Rodolfo’s tahona on the circular encasing is only a couple of feet from a door leading to a lower level where his vats are located. A fermentation vat is slid to and right under the door entrance. The bazazo is pitched directly into the vat, then once filled the vat is moved aside and another is rolled to the location of the first. No wheelbarrow, no ramp, no lifting, simply gravity. There is a small hole in the stone encasing in front of the door leading to the vat area. The hole is dug down and through the wall up to which and opening to where the vat is located. And so at the end of the day the accumulated liquid is simply swept into the hole and it drips directly into the vat. Once again, it’s all gravity! 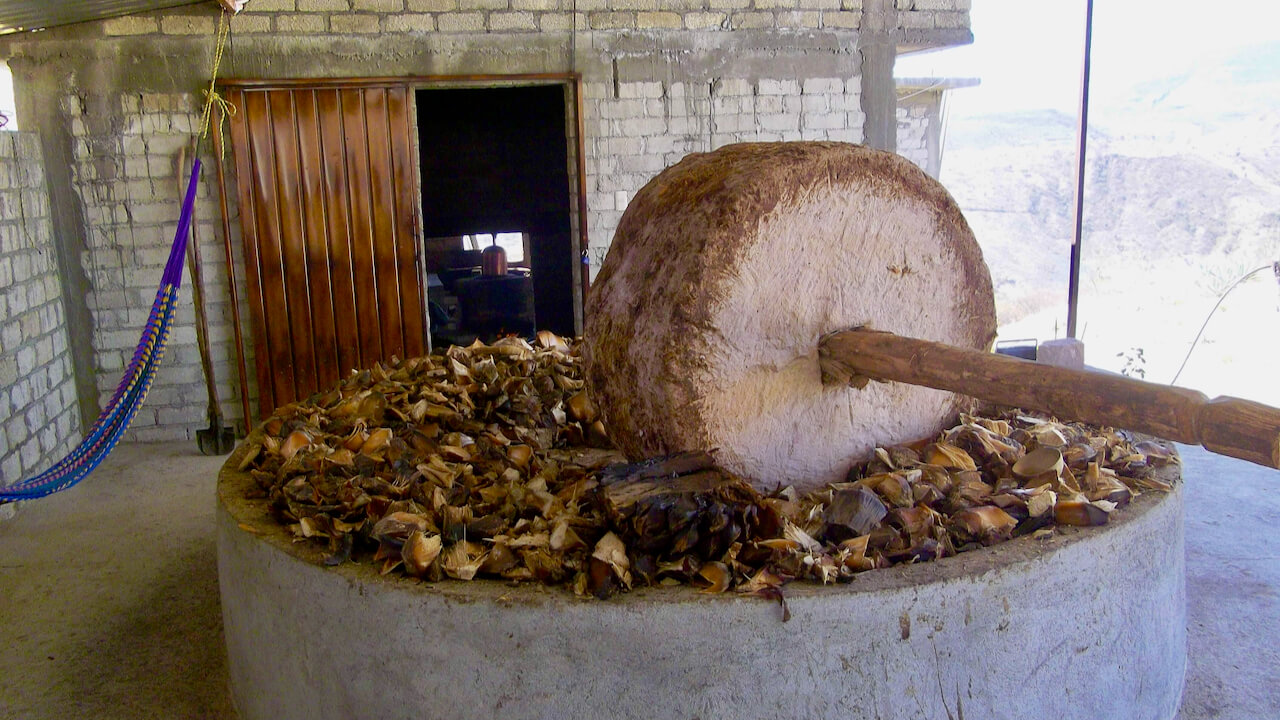 Tahona beside the door to the lower level fermentation room 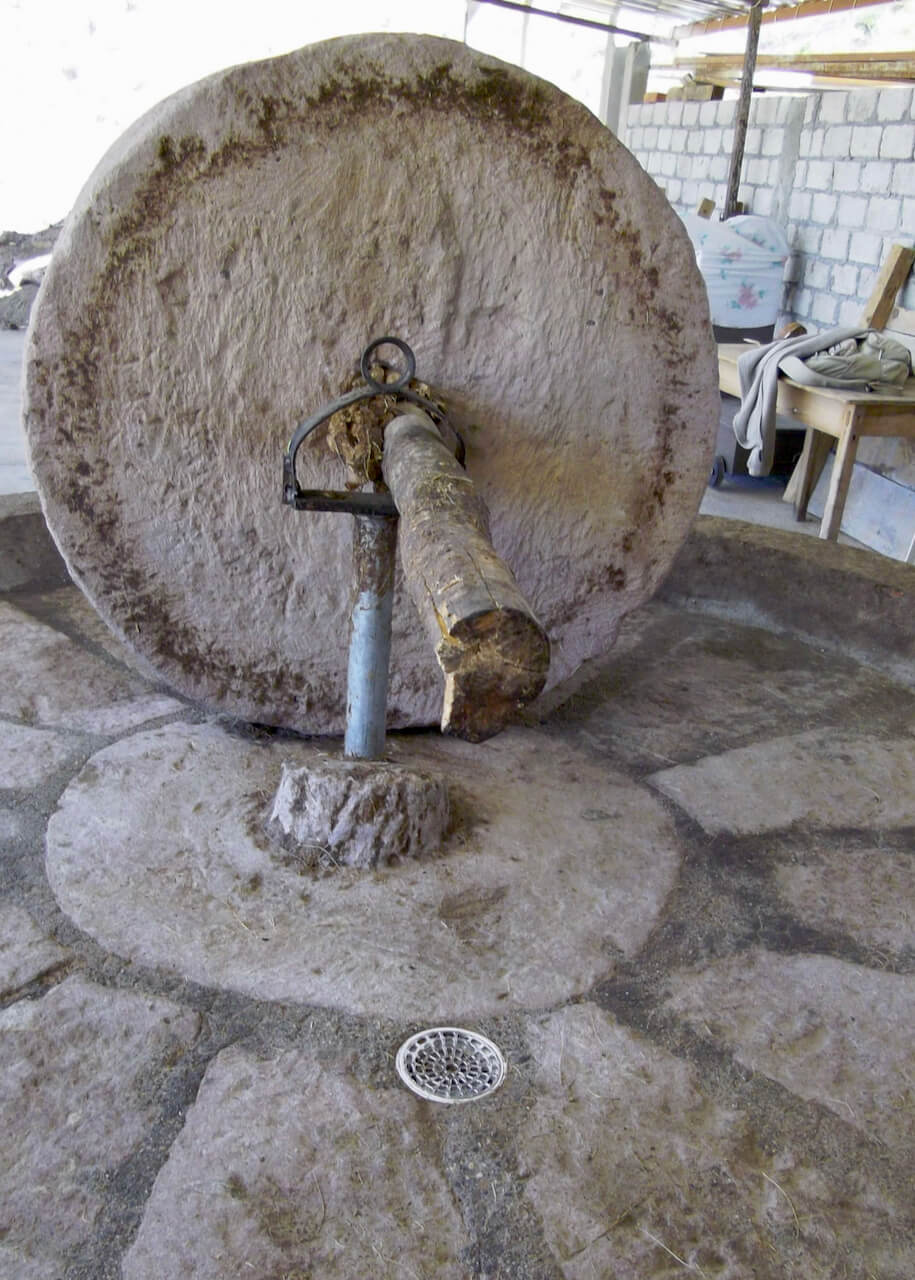 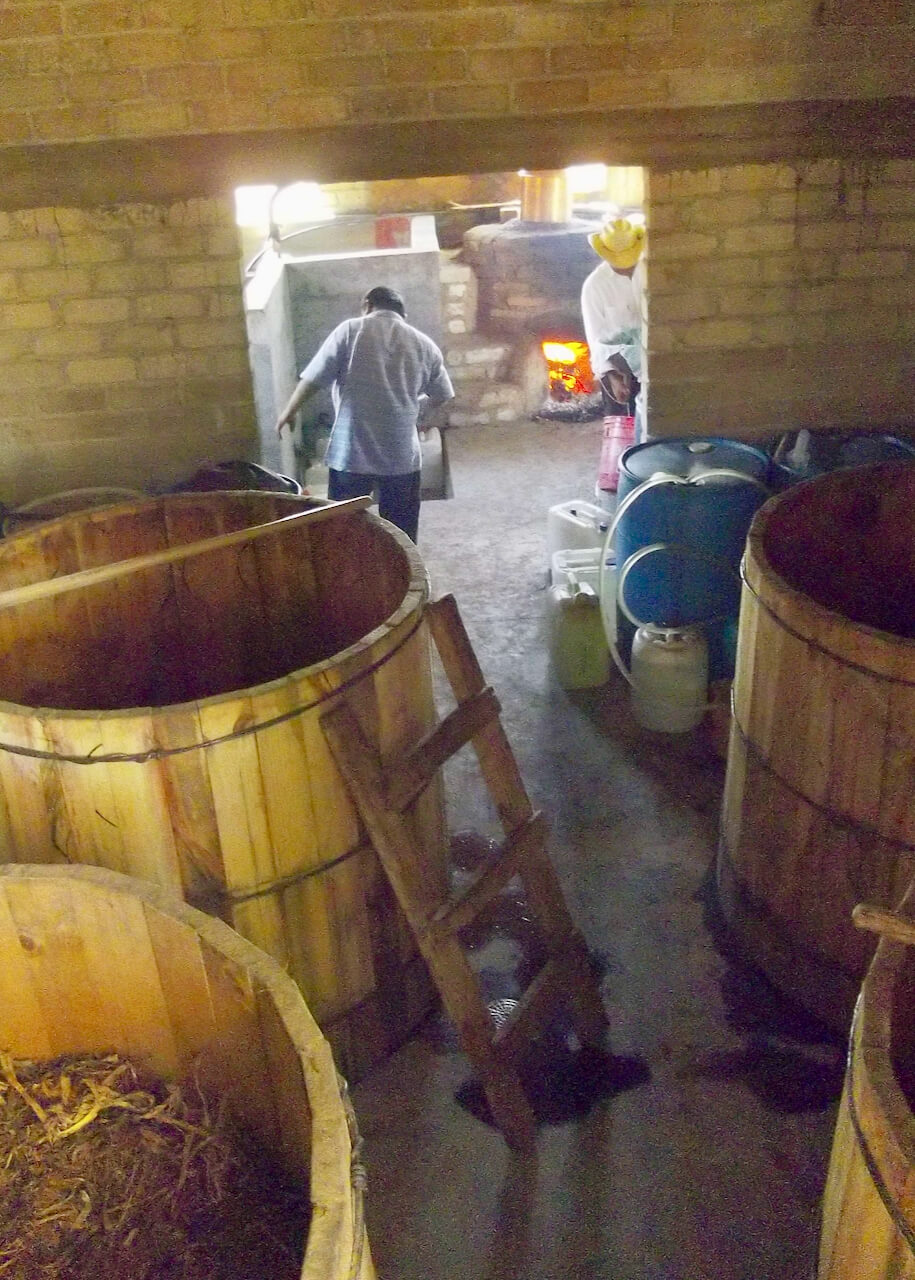 I’m not sure if Rodolfo was recently awoken yet again, perhaps this time by an apple falling on him from a tree, or perhaps it was merely a natural development in the course of teaching his former students. But he’s taken another lesson from Sir Isaac. In order for tractor trailers to access his palenque to transport pallets of bottled and boxed mezcal to Oaxaca and then to the border, a port, or to other domestic destinations, they must wend up an extremely steep dirt roadway and then somehow make a sharp left turn. It’s only a 70 or so yard exercise, but a daunting task. And so this palenquero extraordinaire plans to build a conveyor belt to lower the pallets to the main roadway so that the tractor trailer driver need not worry about getting stuck, or worse yet toppling over the cliff.

Both Rodolfo and the younger José Alberto continue to innovate, their only constraint being insufficient revenue derived from mezcal sales for the realization of their evolving ideas. But no doubt over the ensuing years there will be more to come which distinguishes each of them from their fellow Oaxacan palenqueros.

All photographs are by the author. Alvin Starkman owns Mezcal Educational Excursions of Oaxaca.