El Jolgorio Cenizo is made with maguey Cenizo (agave Karwinskii) that takes up to 14 years to mature. The first batch of this mezcal was released as a fairly large lot considering how seldom agave Cenizo is used in Oaxacan Mezcal. Master Mezcalero Ignacio Parada is well known for his work with wild agave, and this Cenizo is no exception to his strong record of creating great mezcal. Notes of this mezcal include sweet nectar, chalky minerals, and sea salt. It has a long, extended finish. Newer releases of this mezcal come in a black bottle, and are no longer labelled Cenizo as the CRM told El Jolgorio that in order to certify this mezcal, Cenizo could not be used to name this Karwinskii agave. Despite the local naming, this is now simply called a.Karwinskii.

The artwork on the first 8 releases was created by Alejandro Peña (Espadin, Pechuga, Tobala, Cuixe, Madrecuixe, Tepeztate, Barril and Mexicano). The next 5 labels were created by Asis Cortes (Arroqueno, Jabalin, Coyote, Tobaxiche, and Cenizo) and the Sierrudo artwork was created by Alberto Almánza. 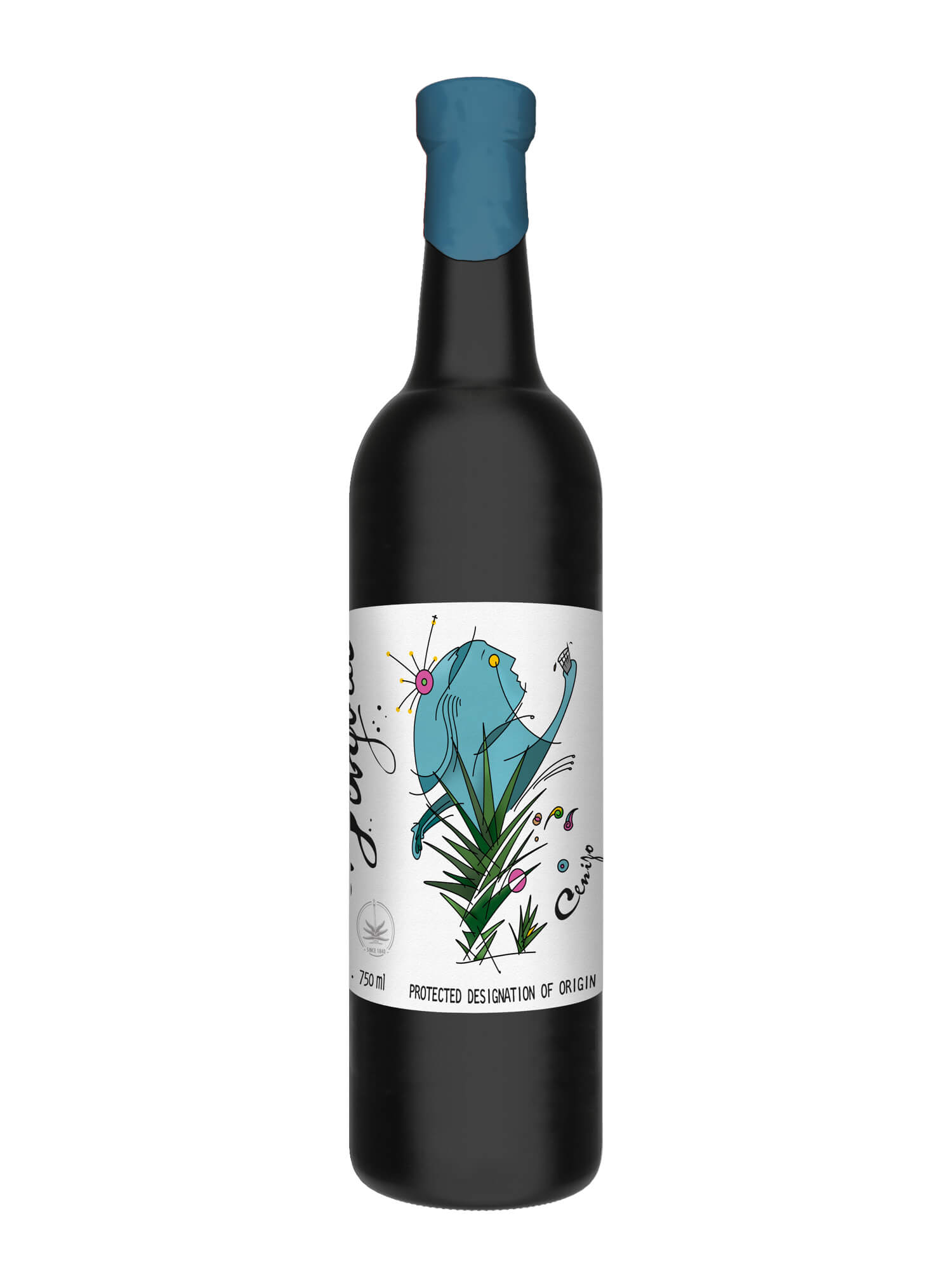 The nose on this one is like sticking my head in a lush garden plot. I get well-tilled soil and big leafy green aromas: romaine hearts, carrot tops, and spearmint. The palate is savory and vegetal with such a high degree of minerality that I’m reduced to thinking in one-word adjectives. Fresh. Grassy. Stoney. Buttery. Incredibly, the finish is even more exquisite with notes of sweetened condensed milk and untoasted sesame oil. It lasts for several minutes before ending gently with a hint of alfalfa sprouts.

Edition 02 from 2018 by Ignacio Parada, Black Bottle 104/800.
The nose on this one is like sticking my head in a lush garden plot. I get well-tilled soil and big leafy green aromas: romaine hearts, carrot tops, and spearmint. The palate is savory and vegetal with such a high degree of minerality that I’m reduced to thinking in one-word adjectives. Fresh. Grassy. Stoney. Buttery. Incredibly, the finish is even more exquisite with notes of sweetened condensed milk and untoasted sesame

Eye opening, and thankfully far too difficult to find more of lest I buy…many. Affording them is another problem. Overall, the complexity here is a treat, it’s succulent. The combination of salinity, fresh fruits and that pop of bright vegetal notes is a profile I can never say no to.

dude, really? this is incredible – so smooth. fresh up front, like a candy or gum almost, very cool (no heat it seems). these EJ products seem to be spot on considering the price points. very, very good, buy them all! (can’t wait for my 3 pack of todos santos arroqueno to show up)

Very delightful. Grassy, with absolutely no alcohol heat on the tongue — in fact, it’s rather cool, almost mint-like, with an oily, slightly viscous umami flavor, which it has in common with the El Jolgorio Tobalá (which was a 5 star bottle in my book). The aftertaste is really special: clean, earthy, creamy — really elevates this to that highest echelon of mezcal.

Edition 03, 2018, Ignacio Parada. WOW!! Tasted all the black bottles at Mezcalogia in Oaxaca and this was the unanimous favorite. Wheat grass, cream, carrot, celery, dry soil, freshly cut grass, tahini. This one is special.

Black Bottle – Edition 01, Harvest 2014. Had this among a few other amazing mezcals and this was the absolute winner. I had ordered not realizing Cenizo was a Karwinskii and that definitely explains why i loved it so much.

High intensity Cenizo Karwinskii. Nose is savory green vegetables and wet rocks. Palate is exactly like other reviewers describe – robust like roasted asparagus and bell peppers and turns minty and stony at the end. Surprising amount of sweetness that brings all the flavors together. Long, savory finish with high minerality. I love karwinskiis and this is a superb example that packs a punch.

I’m a big fan of karwinskiis so this was a treat. Vegetal, minerally and minty. It’s really nice and worth a try.

Edition 01. Harvest 2014. 440 bottles. This is definitely a karwinskii. Vegetal aromas with hints of spearmint and jalapeño peppers. Palate notes of high minerality, green peppers, and buttery asparagus. This is really good. Very enjoyable.

Batch 01, Harvest 2014. 440 bottles. Produced by Ignacio Parada who also does an out of this world mezcal jabali. An oaky smoke on the nose but sweetness on the palate. The finish is long and spicy. This is a very interesting mezcal that seems to get better each time I pour a taste. Too bad this is such a rare agave used for mezcal. Definitely worth a try.