Sotol Por Siempre is produced from 100% wild-harvested sotol. Experienced tumbadores (harvesters) harvest sotol without killing the plant, allowing it to regenerate for multiple harvests. This sotol is roasted underground for 3-4 days and then hand-crushed with axes. It is then wild fermented in open-air vats for 4-8 days depending on the temperature. After the first distillation in wood-fired copper pot still, the resulting spirit is between 18% and 22% ABV. The second distillation takes place in a more precise, gas-fired copper pot still. After the second distillation, the sotol is between 60%-80% ABV and then brought to proof with tails. Sotol Por Siempre is rested for up to 30 days before being bottled. This sotol has notes of black pepper spice, earth, mineral, and wet stone with a long and mildly smoky finish.

US-based Back Bar Project partnered with Compania Elaboradora de Sotol, a 6th generation distillery to release Sotol Por Siempre. Por Siempre means forever in Spanish. The name speaks to forever in its duality; forever in the sense of the future, of time to come, and also of the past and the way that things have always been.

Sipping off the Cuff with Por Siempre Sotol

THE POUR: THE MEXICAN OUTLIER SPIRIT in Saveur 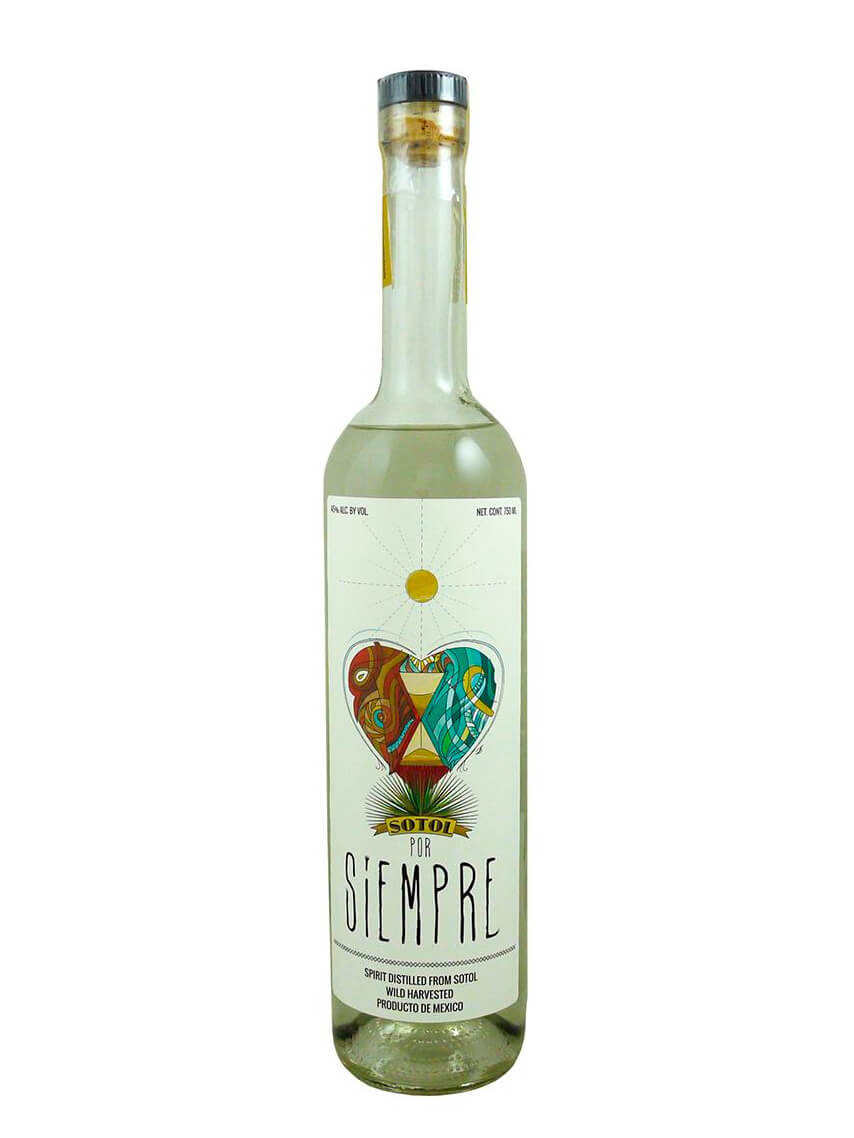 harvest 2021, batch number 210302. aggressively vegetal on the nose, sweet, smooth mineralogy on the way down. notes of clay in the middle with slight clove finish. beautiful sotol.

Earth, earth, and then some more earth. Rainy cement, modeling clay, and random trail-side leaves crushed by hand as you walk up a trail. Taste is heavy black pepper spice with an ever so subtle hint of sweet jackfruit, and those unidentified herbal notes permeate throughout. Almost minty though. Very, very interesting.

This is a great weekday sipper if you’re a fan of sotol. I’m tempted to give it 4 stars for the value/money.

Batch 2 from 2019.
Bold minerality throughout. Heavy limestone on the nose (reminds me of Midwestern cave systems) with complementary aromas of crystallized honey, Necco Wafers, artificial vanilla extract, and just a hint of butterscotch. The palate is super-earthy: potting soil, sawdust, pencil shavings, petrichor, okra, mature kale, and caper brine. A drying finish brings flint, ozone, white pepper, and lime zest into focus.
This is a great weekday sipper if you’re a fan of sotol. I

I’ve had mixed experiences with this, and if I were keen enough to pay attention to batches I might be able to discern why.
I had two delicious bottles matching the flavor profile that most have mentioned: rain on cement is especially apt, with a long finish of smooth river rocks and earth, with a hint of sweetness. Those first bottles made for delicious cocktail mixers where the spirit would really shine on the aftertaste, and were good enough to sip neat.
The latest bottle though, had the funky, biotic, almost vomit-like flavor, like a bit of stomach bile. I certainly couldn’t drink it straight, although in cocktails it ended up settling out just fine. Given those early batches, and the very modest $40 – $50 going rate in NYC, this is worth another shot though.

I’ve had mixed experiences with this, and if I were keen enough to pay attention to batches I might be able to discern why.
I had two delicious bottles matching the flavor profile that most have mentioned: rain on cement is especially apt, with a long finish of smooth river rocks and earth, with a hint of sweetness. Those first bottles made for delicious cocktail mixers where the spirit would really shine on the aftertaste, and were good enough to sip neat.
The latest bottle though, had th

My first sotol. Wet concrete and earth on the nose. Brings in some lime, mint, and pepper on the palate. More of the same in the medium finish.

Several bottles in with this one.. always dazzling the palate with intense spice and minerality. I sip it straight mostly, but it really shines
In a cocktail just as well.

Hay and grassy nose with some rubber funk… bouncy balls. Palate is earthy, brine notes and a dry, mineral finish. Best used as a mixer, but a very cool one.

My first experience with Sotol and not my last. Loaded with minerals and wet earth. Zip of white pepper spice in the long finish. I don’t get the funkiness that others pick up here. I like it, especially as a change-up from standard mezcals. Batch #216.

Grassy, sour, nutty – I dig it. Definitely different from mezcal…more on the earthy and vegetal side. First and only sotol I’ve tried up to this point, but I hope it’s not the last.

Earth and citrus on the nose, with a little wet cement. Palate is like slap in the face with sweet lime followed by less intense earth and minerality. Finish is earthy minerality with a hint of smoke.

An excellent spirit, easily worth the $50 I paid for it. There’s a funky note (don’t know how else to describe it) present throughout, but not in a bad way. I’d highly recommend this to someone, particularly if you want something sweet but unusual and different.

Nice contrast from the influx of mexcals I was trying. woody with a nice bite.

I love Sotol, but this one is a bit high on the funky wild microbes. It has a very prominent cheesy character that on it’s own is too overpowering to enjoy more than a few sips. Would be good mixed.

Lot 14. Wow!! I love this Sotol!! It’s like climbing out of your tent in the desert after a rain storm. Earth, flowers, spice, and a ton of different mineral flavors. A long complex finish. Better than anything at this price point. I can’t believe how good this is.

This is probably the first sotol I ever tasted. I’m still a sotol noob but find Sotol Por Siempre really good. There is lots of wet earth and fresh cut grass here with caper brine and lemon peel. Four stars considering the value.

Strong minerality – rain on hot cement. Purple and white flowers, bitter or capiscum tickling in the background with dry smoke. Definitive product, and I believe the family producing has mentored others as well. Would love to rate it 5* for that alone, strong terrior but typicity might not show as well. Available, affordable, buy a bottle!