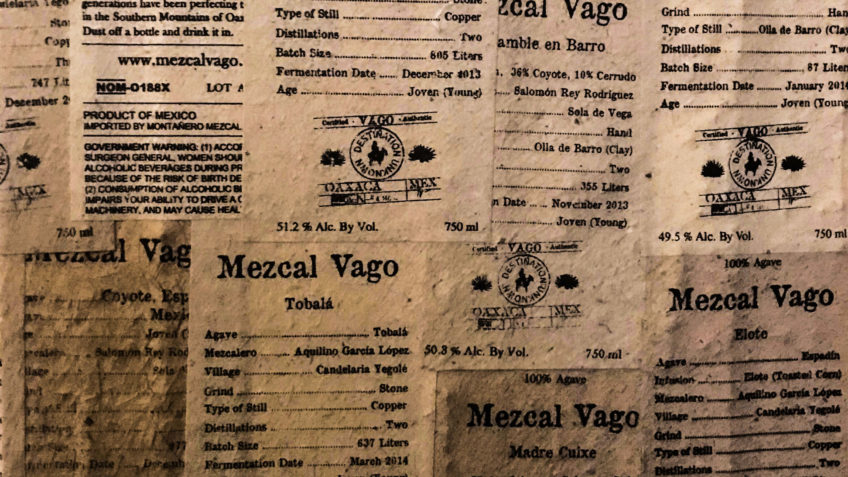 The Mezcal Vago Tasting Room in Oaxaca is located on a quiet residential street in a small suburb of Oaxaca City. The space is used mostly for aging and bottling mezcal from Vago’s producers, but they have a bar set up in the corner of the main room that has four or five bar stools and a bottle of seemingly every Vago batch ever released. It’s not open to the public, but they occasionally open it up for visiting bartenders or other industry heads. Fortunately, we were invited to visit the Vago Tasting Room this past May.

Los Vagos and the Vago Brand

We’d met Judah Kuper, co-founder of Mezcal Vago, at the screening of Agave: The Spirit of a Nation at SXSW in March 2018. The story of Vago is deeply intertwined with Judah’s history, experiences, and future with Oaxaca. The full story of how Vago was created is worth reading. You can find it here on their website. For the TLDR crowd, here are the cliff notes: Judah and Dylan (the other co-founder of Vago) spent several years exploring the Oaxacan coast, looking for hidden waves to surf. They eventually landed in Puerto Escondido, where they opened a beach bar. While working at the bar, Judah got an ear infection and needed to visit a health clinic. He quickly fell in love with the nurse who was treating him, and he began courting her after he healed. She was unfortunately already engaged, but Judah kept chasing her. Eventually her fiance caught wind of the gringo going after his girl and beat up Judah pretty badly. The fiance was essentially banished by the police, allowing Judah and the nurse to fall in love. After awhile, Judah went to the remote mountain town of Candelaria Yegole to meet her father, Aquilino García López. The father approved their marriage, and they were soon wed.

Aquilino made incredible mezcal that was mostly sold locally, and Judah began taking it back to Puerto Escondido to be sold at his and Dylan’s bar. Visitors loved the mezcal and Judah was about to become a father. Judah and Dylan formally teamed up with Aquilino in 2012 to create Mezcal Vago as a better way to support their families. They eventually began exporting to the US, and the demand quickly required bringing on three additional producers to help with production: Emigdio Jarquín Ramirez in Miahuatlan, Salomón Rey Rodriguez (Tio Rey) in Sola de Vega, and Joel Barriga in Hacienda Tapanala.

Before our flight to Oaxaca this past spring, I messaged Judah to see if he’d be around. He said that he would not, however Dylan would be working in Oaxaca while we were there. I texted Dylan and he invited us to swing by the Vago Tasting Room. So much of the forward-facing Vago story (as recounted above) revolves around Judah, so we were super excited to meet Dylan. 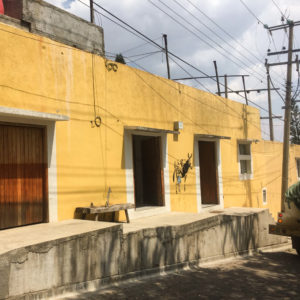 Outside the Vago building in Oaxaca 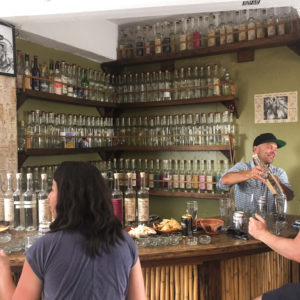 Dylan serving Mezcal at the bar inside

Our taxi dropped us off down the street, and we quickly identified the Vago building with it’s large donkey logo on the front wall. We walked in and saw Dylan talking to a couple bartenders at the corner bar. He handed us Modelo beers as we sat down. It was immediately clear why he and Judah get along so well. They are birds of a feather and appear to have a similar outlook on life. With so much of the Vago story revolving around Judah’s family, it was super refreshing to see that Dylan was equally as passionate about Vago and the communities in which they work.

We wanted to make special mention of Dylan in this post because 1) the industry press doesn’t give him the notoriety he deserves (the dude co-founded Vago!), and 2) he’s a really good hang. Cheers to you Dylan!

Dylan walked us around the facility and showed us some of their storage and bottling equipment. Their mezcal only touches plastic for a couple hours when it’s transported from the palenque to the bottling facility. Outside of that limited contact, all aging and transporting is done in glass or steel. 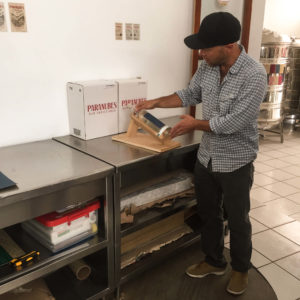 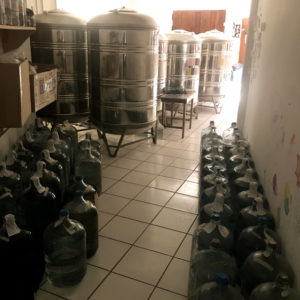 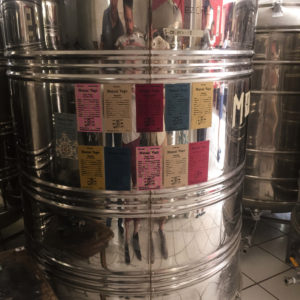 A Vago storage tank with labels: Aquilino’s bottles have a beige label, Joel Barriga’s are darker tan, Tio Rey’s are red, and Emigdio has a blue label. 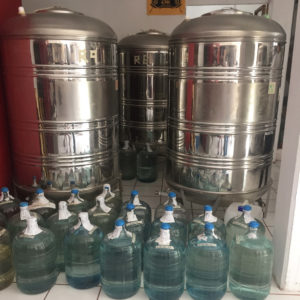 More Vago in steel and glass storage (There was a lot!)

After a quick tour of the building, we found ourselves back at the corner bar. We started the tasting with an Espadin from each of the four Vago producers. While tasting them, Dylan walked us through the intricacies of the different distillation techniques used by each distiller: Aquilino and Joel Barriga both distill in copper; Tio Rey distills in clay pots; and Emigdio distills in a copper refrescadora. Each technique gives the mezcal it’s own unique character.

We continued the tasting as Dylan guided us through some very rare and obscure Vago releases, including many that were only available regionally, like the Colorado-only Madrecuixe-Tobala from Emigdio that was rested in clay for three months, the Texas-only Mexicano-Tobala from Aquilino that was rested in glass for one year, and the renowned Curry-30 batch that was only released to the Bay Area a few years ago. 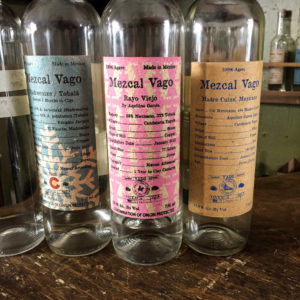 Colorado Vago, an Aquilino clay-rested mezcal, and the Curry-30 batch 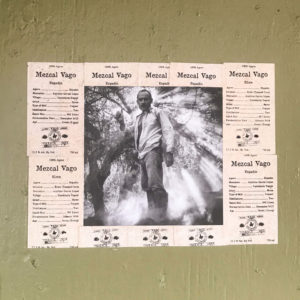 Mezcalero Aquilino looking like a rockstar above the bar

In total, we tasted around 20 mezcals with Dylan as he gave us an invaluable glimpse into the lives of the Vago mezcaleros. One of things that stuck with me through the conversation was how different each mezcalero was from the others. Prior to Vago, Aquilino sold most of his mezcal locally (and cut his mezcal with water, not Agua de Colas as he does now), Emigdio produced for Mezcaloteca, Tio Rey sold locally, and Joel Barriga, who still only produces mezcal part time, focuses mostly on his main business: cattle ranching.

Dylan recounted other interesting tidbits about the Vago agave supply as well. Tio Rey, for example, is currently cultivating five different types of agave in Sola de Vega, including several thousand agave Tobala, which take about eighteen years to reach maturity on his land. Whenever Vago bottles list “Parcel” on the label, it means that the agave was purchased from the parcel location because the mezcalero did not have enough agave ready to meet demand. They’re super transparent about this. 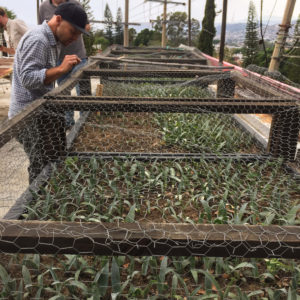 Dylan showing us one of the agave beds on the roof 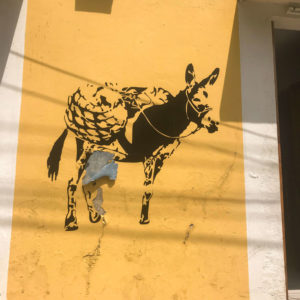 We finished the tasting with a last pour on the roof of the building, which has an incredible view of the Oaxacan hills. As we sipped our final mezcal and looked over the thousands of agave pups being cultivated on the roof for re-plantation, Dylan told us about the Donkey logo that is painted on the outside of the building and can be found on the caps of many Vago bottles in the US. He had been out in Sola de Vega with Tio Rey one night several years ago, and Tio Rey had gotten all misty-eyed talking about the donkey that worked at his father’s palenque when he was a child. The donkey’s name was La Cocuya. Tio Rey had shown Dylan an old photo of the donkey carrying two large agave pinas. Dylan took a picture of that photo of the donkey with his phone, and that phone picture was later rendered to become the logo that is largely synonymous with Mezcal Vago.

To me, the history of the Vago donkey parallels everything else about Mezcal Vago. The general vibe you get from both Dylan and Judah is that things always seem to work themselves out. Everything falls into place if you allow it to. Though Dylan and Judah both admit they never planned to have a business that supports several families in multiple communities, they seem to be doing well with the responsibility. It’s as if nothing was ever forced with Vago, like they and their producers were meant to be doing exactly what they’re doing today. And they all do it well.

I’m visiting Oaxaca next year and it would blow my mind to get in here! I’ll be in the city for a week, so hopefully they will have an opening day.
I’ll also be doing some writing/research on sprint production, would it be worth throwing them and email?! Great story!

It’s worth a shot! If you’re in the industry and they’re in town, it could work out.

Awesome! Love that brand…everything from the owners, the story, the mezcaleros, the juice, the labels, etc… 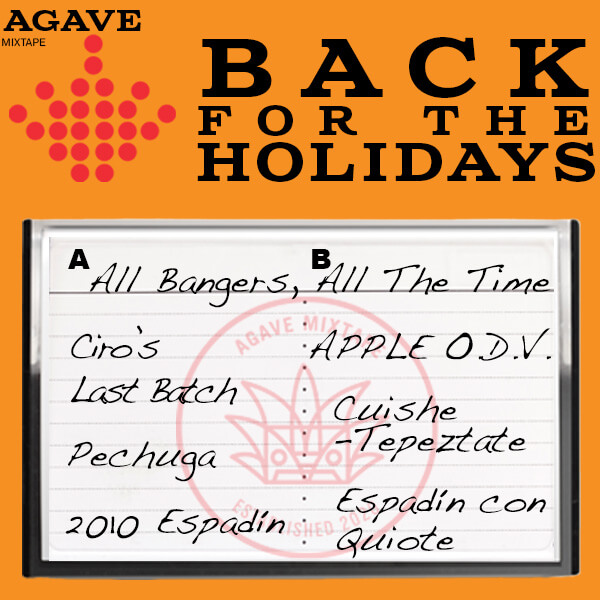