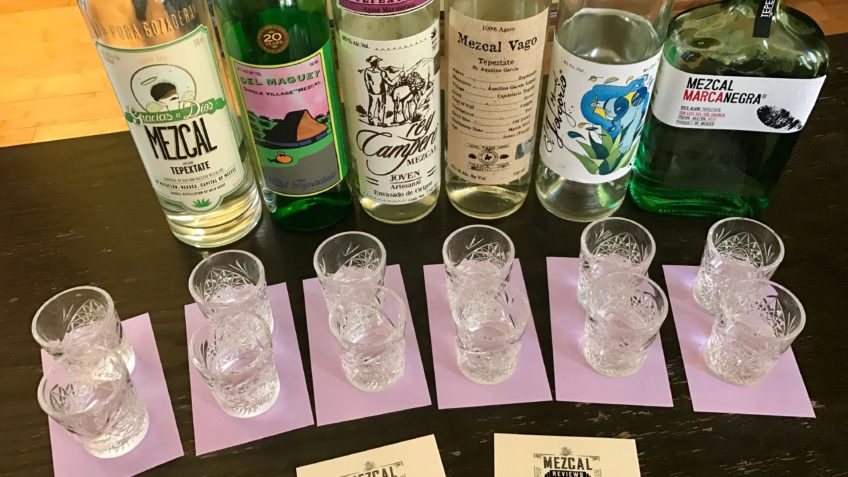 When we first stared working on Mezcal Reviews, Jonny and I thought that once we had about 100 bottles on this site, we’d be struggling to find more to add. As of this writing, the site has 260 bottles and we’re not slowing down! Over the last few months we’ve tried a lot of mezcal, “collected” some mezcal, met brand representatives, and even took our first trip to Oaxaca. Naturally a bias will develop towards certain brands or mezcaleros. We decided to do a blind tasting in an attempt to remove bias and also see if our palates could tell the difference between a $70 mezcal and a $130 mezcal.

Keep in mind, we’re not “mezcal master sommeliers”.. though that title sounds really cool. We’re just like most of our readers, we’re mezcal nerds. If you’ve tried some of these mezcals please add your comments below or better yet, write some reviews.

How to set up a blind tasting

This is the first in a series of blog posts on blind tastings. Here’s how you can organize a blind tasting with friends:

This simple setup worked quite well. We had about half of each pour and then jumped around as we compared notes. Don’t forget to drink water as well. You could also have a citrus sparkling water to cleanse the palate between mezcals or do a full on setup with oranges and worm salt. Our first tasting was a lot of fun, here’s what happened…

For our first ever blind tasting we decided to have a 100% agave Tepextate/Tepeztate mezcal tasting.. as you might imagine, it was quite the “tepez-tasty” evening! Agave tepextate is one of the most interesting and rare agaves in Mexico. Agave Tepextate is part of the agave Marmorata family. Mezcal PhD’s well-researched list of How Many Varieties of Agave Can Be Used to Make Mezcal? only has Tepextate listed under the Marmorata family (also called Agave Becuela).. so it’s either the only sub-species or the only one known for use in mezcal production. Check out the the bottom of this post for a video of agave Tepextate growing in the wild.

This plant takes a very long time to mature, sometimes up to 25-35 years. Many of these wild agaves are found growing on steep grades in rocky soil. Their leaves are broad and wavy. Sometimes the agaves grow hanging horizontally from mountain cliffs which makes extracting the plant for mezcal dangerous. Mezcals made from Tepeztate have very distinct aromas and flavors. For me, a good Tepextate tastes like the perfect mix of freshly cut sweet and spicy peppers, intensely vegetal and earthy but not overpowering. 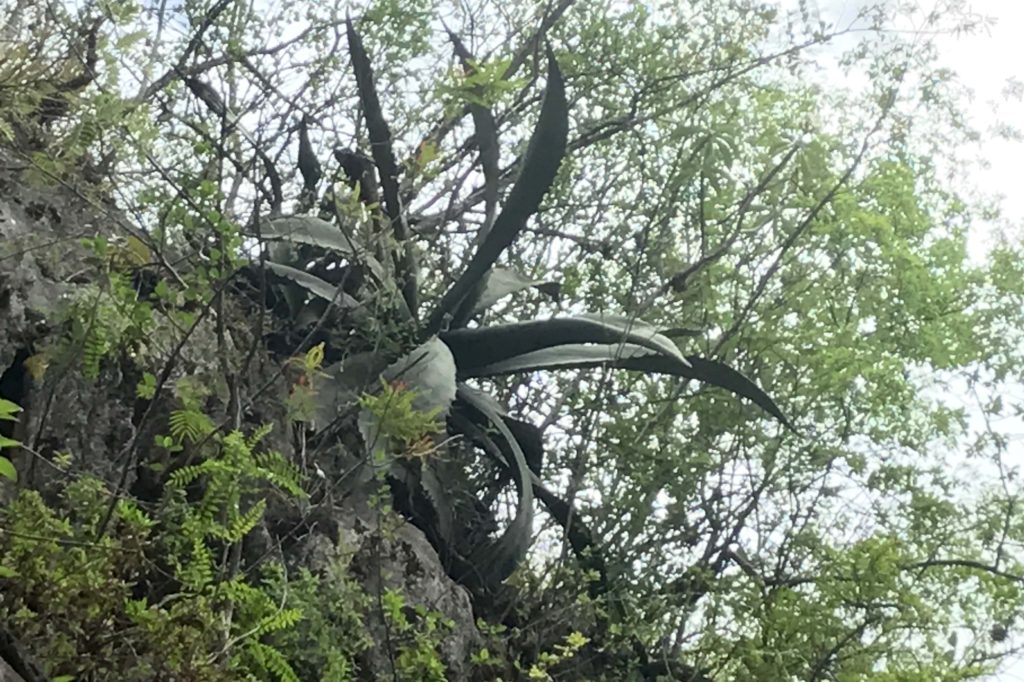 Considering the rarity of agave Tepextate, these mezcals ain’t cheap. If you’re getting a pour at a bar, expect to pay at least double of what a pour of Espadin might cost. Considering that, you might as well just get a bottle! All of these mezcals are 100% agave Tepeztate, but the agave is used in many ensambles as well. Jonny and I pulled together our personal collections and put the following bottles in our tasting lineup.

One thing that surprised us when looking at these bottles was the consistent ABV across brands. Most of these Tepextate mezcals are around 46% ABV range with the exception of the Vago which is seemingly explosive at 53.1% (more on that later). The Gracias a Dios was the least expensive and the El Jolgorio was the most expensive. Even in Austin, agave Tepextate mezcals are not found in many stores nor bars. Here is the blind tasting in the random order that we tried them.

Jorge Mendez makes the Tobala and Tepextate for Marca Negra in San Luis Del Rio. Neither of us had spent much time with this mezcal before the blind tasting and our reactions couldn’t have been more different.

“Spicy with a bit of heat. It has a punch to it. It’s sharp, pointed, with notes of freshly ground black pepper, charcoal, lemon zest, and pine.“

My notes were quite opposite.

Neither of us guessed the mezcal we tasted was the Marca Negra.

Oscar Hernandez makes all of the Gracias a Dios mezcals; this one is made in Santiago Matatlan. He even makes a Mezcal Gin. Both of us are familiar with this Tepextate. It might be the only decent Tepextate that is also affordable enough to buy your friends a round at the bar. It’s usually a good idea to buy mezcal newbies something other than an Espadin to really open their mind. Jonny’s notes were:

“Much milder than the first sample, much smoother. Soft mouthfeel that is rich and buttery. Tasting notes of green pepper, vanilla, and orange.“

While I enjoy this mezcal I do pick up a few artificial flavors. I’ve also noticed batch quality can vary a bit. My notes were:

“Slight chemical and a bit of water compared to the first mezcal. There is faint pepper and tobacco with lime. Lots of vegetal spice on the nose along with copper.“

We both correctly guessed this mezcal was Gracias a Dios. 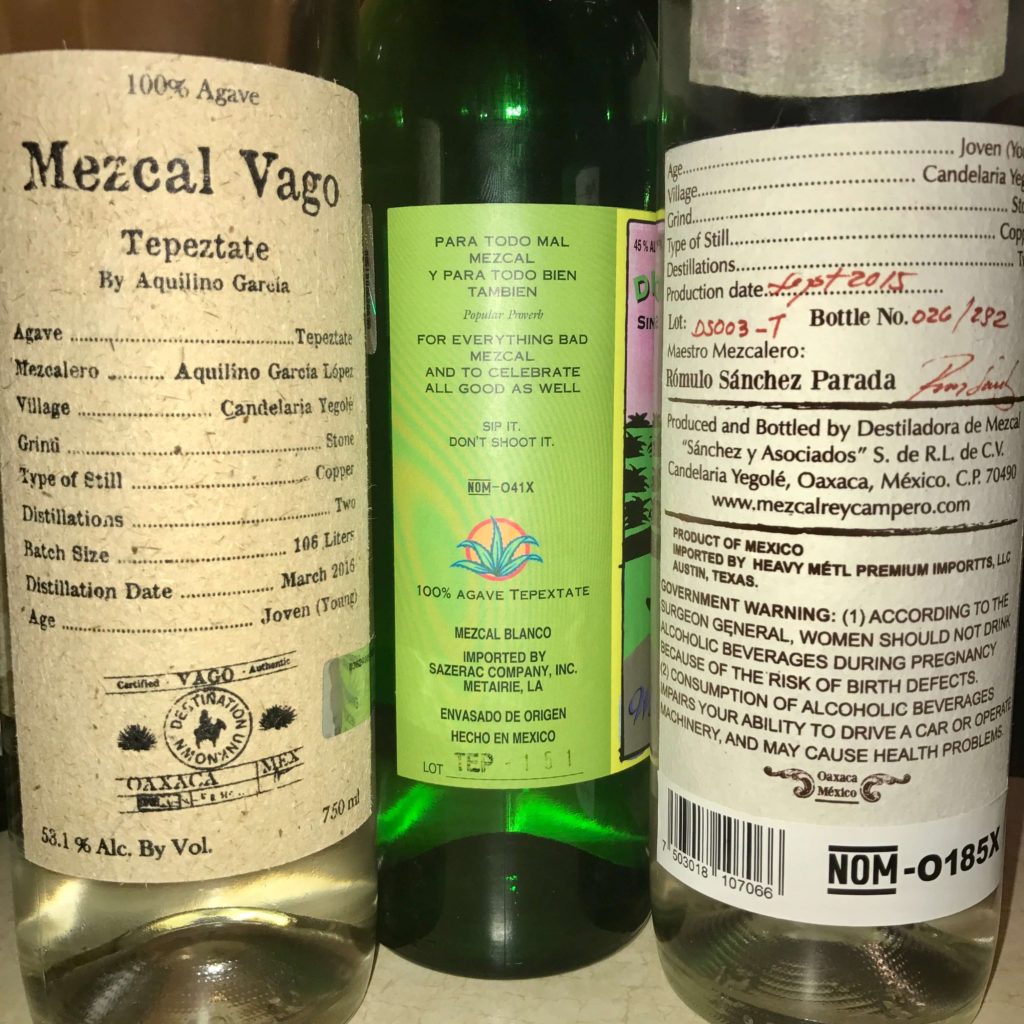 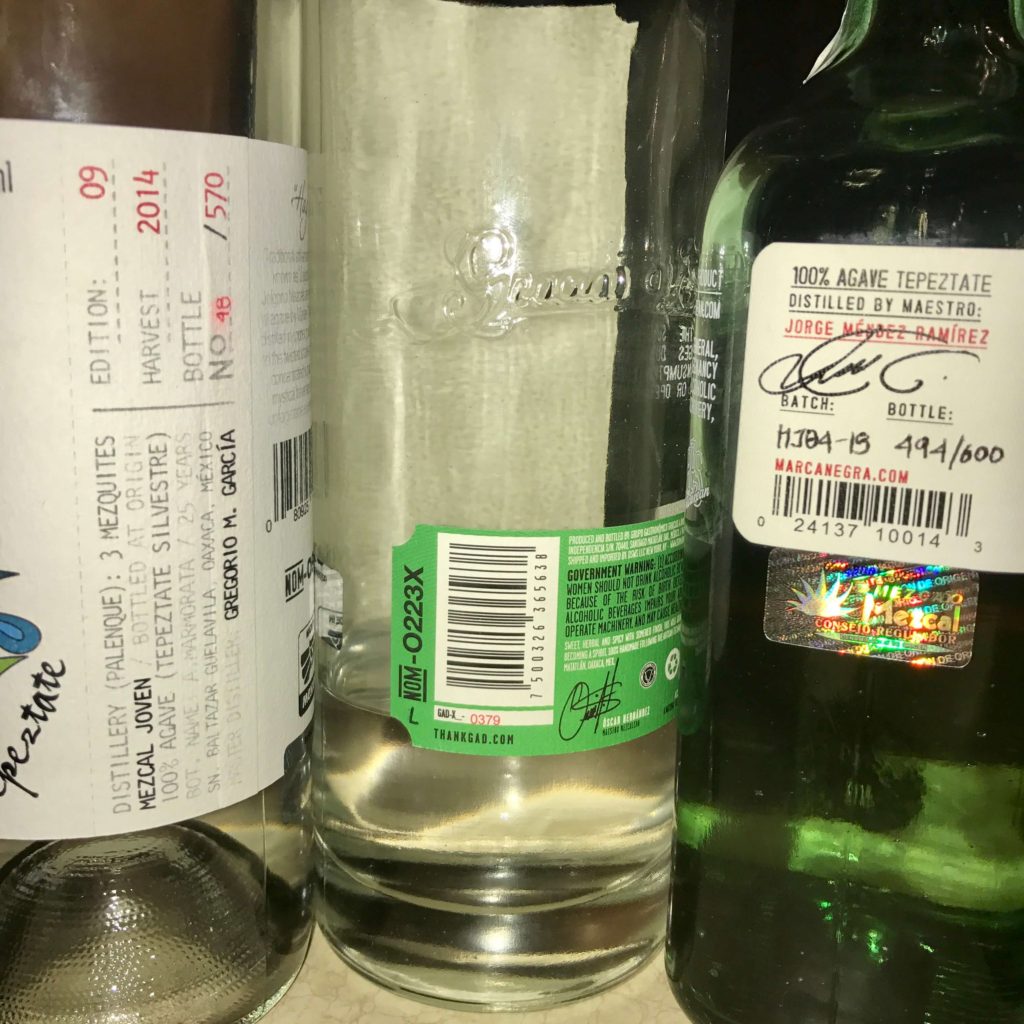 Romulo Sanchez Parada is the “king of the countryside” in Candelaria Yegole and the maestro mezcalero of Rey Campero. He makes all of the Rey Campero mezcals including their superb Jabali. Once again, there were some different reactions to this mezcal. Jonny’s thoughts were:

“Floral on the nose. Creamy mouthfeel with notes of caramel, pepper, and orange cream. This is warm and very soft.“

We both got a lot of fruit but differed on the heat factor.

“Lot of fruit here.. Slightly dry. A bit of a hot finish. Bit of cinnamon and sugar on the nose.“

Again, we both correctly guessed this was the Rey Campero.

This Tepeztate is from Aquilino Garcia, a neighboring king mezcalero in Candelaria Yegole. This mezcal had the highest ABV at 53.1%. Aquilino has also made a few ensambles with agave Tepeztate including a Sierra Negra and Tepeztate which sounds interesting. Here are Jonny’s thoughts on this 100% wild Tepeztate mezcal:

“Highly pepper-infused flavor. It’s balanced and colorful. It hits the whole palate and with notes of charred citrus.“

“Amazing nose, smells like a bouquet of sweet peppers. Full flavored. This must be the El Jolgorio?! Or the Vago?! A bit of a palate burner but very very good. There are almost gin botanicals here.. so complex, incredible.“ 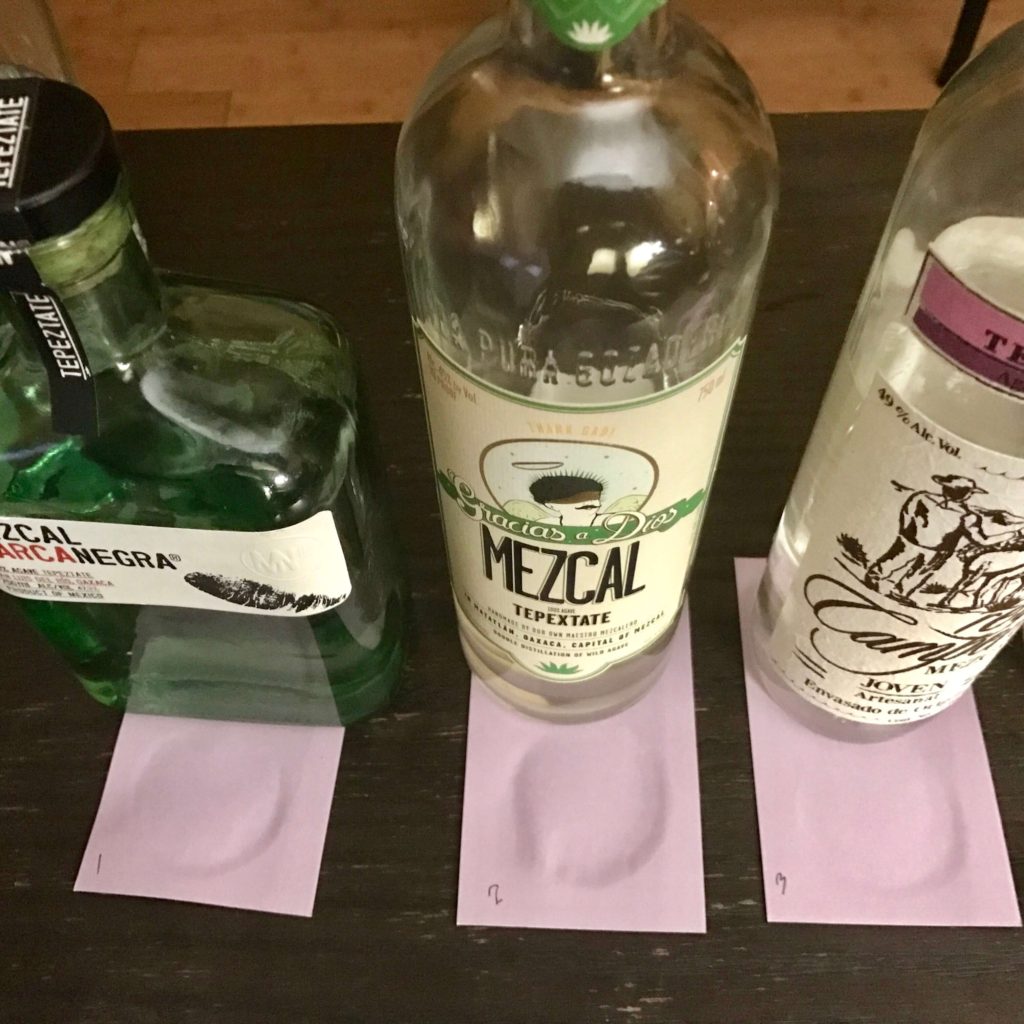 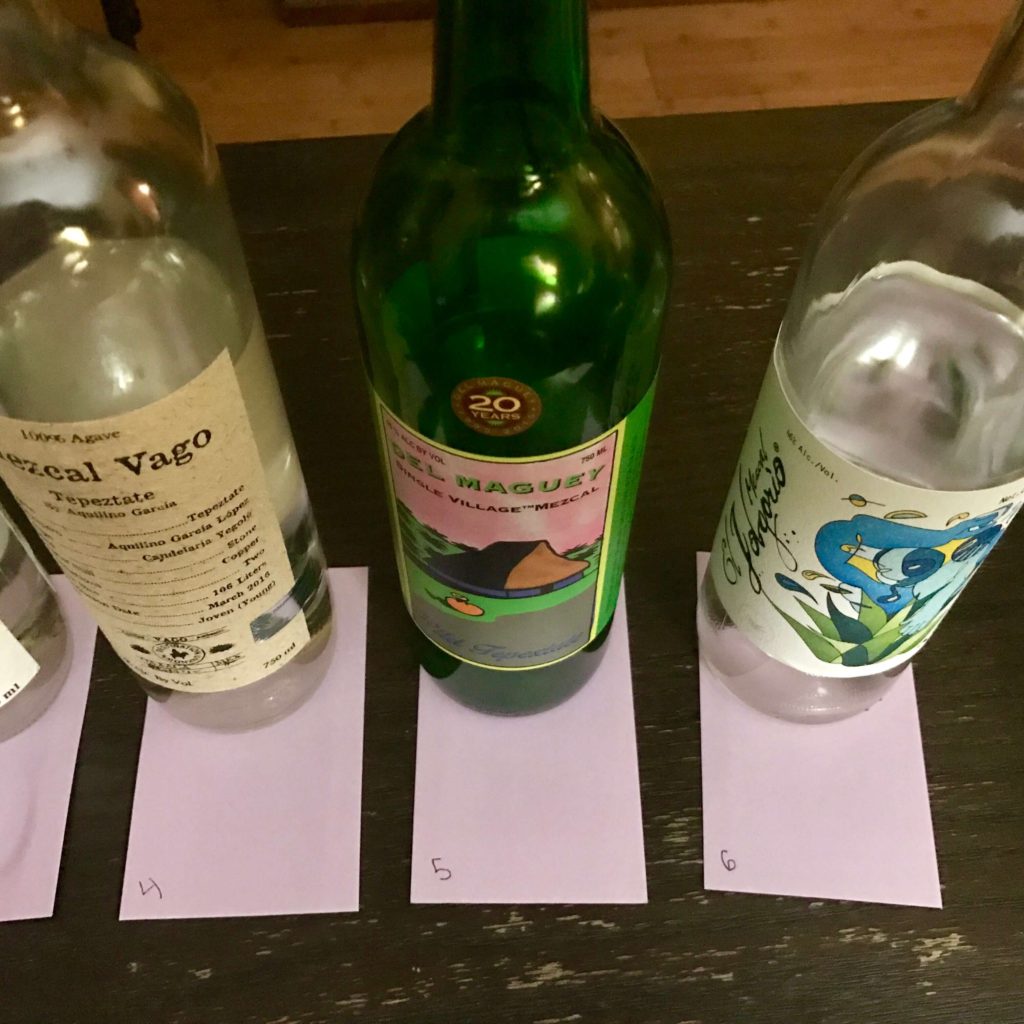 This Tepextate is from the Sierra Norte region of Oaxaca and produced by Del Maguey’s mystery mezcalero who also makes their Tobala and Espadin Especial. It’s definitely a bit milder than mezcal #3 and #4 in our lineup. Both of our notes aligned on this one. Jonny’s were:

“The nose is rich in vanilla. This one is greatly cooled off from the others. The notes seem a bit muddled after the fourth mezcal. It’s peppery with notes of lemon and orange.“

Similarly, my thoughts were:

“Cake frosting on the nose. Vegetal and softer than the last hot mezcal. Little bit of apple peel.“

This expression of tepextate is very approachable with well-defined flavors. We both agreed it was one of the favorites and correctly guessed it was the Del Maguey. My guess was based on the nose.

Last but definitely not least, we tried the last mezcal which ended up being the El Jolgorio from Gregorio Garcia. Our bottle was Edition 9 from 2014. Ignacio Parada also makes a Tepextate for El Jolgorio but we haven’t tried it yet. We were a little burnt out at this point in the tasting. Our notes were:

“Chalky pepper on the nose. The taste is smooth with caramel and orange.”

“Fresh cut grass.. This is the El Jolgorio! A bit oily. Velvet. Spice.“

We both thoroughly enjoyed this mezcal and guessed correctly it was the El Jolgorio. This mezcal has an incredible range of flavors and is a must-try.

Okay.. so the blind tasting didn’t totally eliminate bias since we were able to guess the brand 70% of the time. We guessed more far more accurately than I thought we would. Also, we didn’t tell each other our predictions until after the tasting. Comparing notes before revealing the mezcals was a lot of fun and helped identify key flavors in each of these unique bottles. All of these are pretty fantastic.. we must have good taste!

Overall I think the Mezcal Vago Tepeztate was the best for the price, though some might find it too aggressive in which case the Del Maguey might be a better option. El Jolgorio is an incredible treat but also expensive. Is the difference between Gracias a Dios and the El Jolgorio worth the $65 price difference? Some would say absolutely, others might disagree. That’s up to you.

Of course, this Tepextate tasting didn’t include every Tepextate mezcal available.. if it did I would have probably lost my ability to type this blog post. Some notable mezcals not included (because we don’t have them) were:

Thanks for reading and stay tuned for our next blind tasting blog where we taste mezcals made with 100% agave Tobala.

Fantastic Report my friends. It requires passion and love to make such honest reporting. Learnt a lot about Mezcals. Time to make a pilgrimage to Oaxaca. Million Thanks

Wish I could have been there for this tasting!! I bought a bottle of the Del Maguey in Mexico a couple of years ago and was very disappointed, it must have been a batch issue. I have tried two other Agave Marmorata besides Tepextate. Pizorra and Curandero. I’m not sure if these are sub species or just different words for the agave in different areas. 5 Sentidos has a Pizorra that I tried at El Destilado in Oaxaca City and it was fantastic!!! I didn’t write down my notes but I remember that we were both struck by how much it tasted like peanuts!! Fresh jalapeño and peanuts! La Botica in Mexico City makes a great Curandero with more typical Tepextate like flavors. I tried it at their Roma Norte bar on Calle Orizaba.

Thanks for the comments! Since writing this blog we’ve tried Pizorra and enjoyed it; a small amount from 5 Sentidos made it to the US. Never heard of agave Curandero – thanks for the info. Regarding the Del Maguey Tep.. I’ve grown less fond of it over the years but am still in love with the Vago/Aquilino Tepeztate.