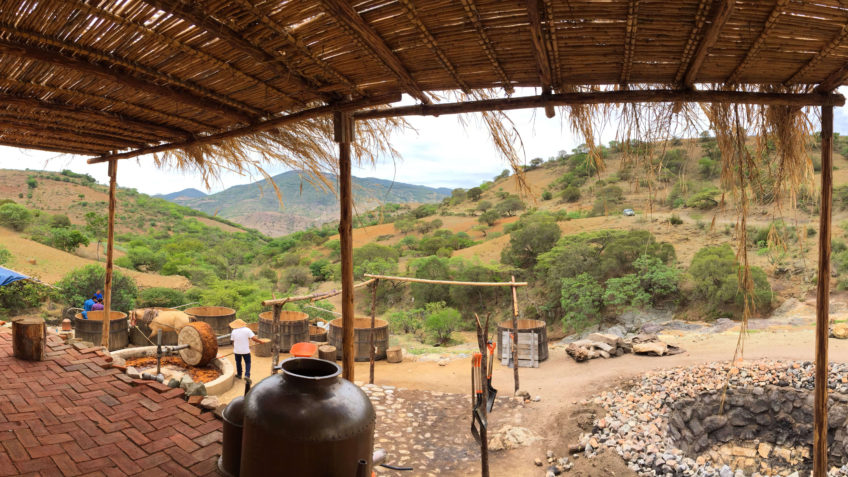 Mezcal Union is a favorite among bartenders in both the US and Mexico. You’ve likely seen it at a liquor store or at your local corner bar. If you’ve ever looked at their bottle closely, you may have noticed that it’s made with both agave Espadin and agave Cirial. This is noteworthy, because almost all other mezcals at their price point are made with strictly agave Espadin. The agave Cirial adds a slight vegetal character that smooths the tougher notes found in some other mezcals. If you’ve been drinking Union for as long as us, you may also recall that older batches included agave Barril as well.

We met one of their co-founders, Alejandro, at a Mezcal Union tasting at Austin Wine Merchant a few months ago. We asked him why they no longer use Barril in their spirits, and he told us they realized that they were unable to source the Barril sustainably. They didn’t want to be part of the extinction of an agave species, so they stopped using it. As you may have read in our Sustainability Blog Post, the future of agave is a serious concern as mezcal continues to gain more international acclaim. The average agave Espadin takes 8-10 years before it reaches maturity and wild agave takes even longer. Agave Arroqueno and Tepextate, for example, can take over 20 years to mature. This long growing cycle makes it extremely difficult to estimate future demand, and no one predicted the current mezcal boom, which has put stress on the industry. 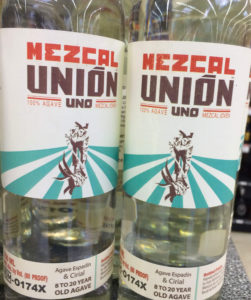 Many large brands seeking to capitalize on the quick growth and popularity of mezcal are buying all of the agave they can find. They do this without putting forth any replanting initiatives, and thus putting further stress on the fragile agav-e-conomy. Alejandro’s acknowledgement of this issue is crucial, and it illustrates what really makes Mezcal Union unique.

Mezcal Union began when a group of friends decided to start a mezcal project. They weren’t sure what exactly they wanted to do, so they began visiting palenques in Oaxaca to talk to people about what would work. They met an old man on one of these visits who explained that the growing popularity of mezcal is changing the demands on those who have been producing mezcal for generations. He said that future mezcaleros would not be able to do all of the distilling, bottling, branding, marketing, sustainability efforts, etc…that are essential to the growing demands of the profession. In order to move the spirit of mezcal forward, and increase the livelihood of those involved in producing it, some sort of co-op or union needed to be created, which is how they got the name for their brand. Their Union El Viejo, which is an ensamble of agave Espadin and Tobala, is named in homage to this old man. 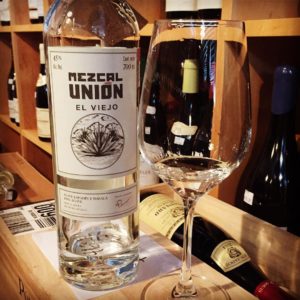 Initially, the Union co-founders were just marketing guys who wanted a mezcal brand, so they found a producer who made a great ensamble of agave Espadin and Cirial for them. They called it Union Uno, because it was their first release, and it’s been extremely popular to date. In the beginning, the co-founders handled all the business, and they left their mezcalero to control the product. They soon realized, however, that they needed to increase production in order to meet demand. With the help of their mezcalero, they began adding more palenques to produce their Uno mezcal. With the addition of these palenques, the Union was born, and the co-founders began seeing the positive impact that their cooperative brand could have on the rural communities that made their mezcal.

Once they had several individual palenques making their mezcal, they realized that they needed to be more involved with the sourcing of their agave. They wanted to make sure that their practices were as sustainable as possible. To do this, they hired a new employee to work directly with agave farmers. His sole job is to form partnerships with farmers, helping them to plant agave based on estimated future demand. These partnerships help the farming families maximize their ability to sustainably meet demand, while still allowing them autonomy to operate within the Union network.

A few months after meeting Alejandro in Austin, we got a chance to catch up with Mezcal Union at their distillery in San Baltazar, Oaxaca. Alejandro had connected us to Andres and Pablo. Andres runs Union’s operations from Mexico City and Pablo lives in Oaxaca and regularly checks on the different palenques that make their mezcal. They’re both young, energetic, and passionate about what they do. They picked us up at our Airbnb in Centro around 9am and took us to an amazing breakfast of coffee, Oaxacan hot chocolate, and some of their favorite Oaxacan breakfast plates.

They drove us to San Baltazar, a small town surrounded by agave-rich hills, about 90 minutes outside of Oaxaca City. The little town rests between mountain slopes that have deep crevasses cut from flowing water in the rainy season. The road out to the Palenque was well off the paved highway, down a steep and winding dirt path that has a sharp open ledge that drops off several hundred feet at times.

We arrived at the palenque (distillery) to find that it was completely off the grid, with no electricity or running water. The stream next to it was dry due to lack of rain, but their mezcalero was grinding freshly cooked agave via horse-drawn tahona. Andres grabbed a few bottles of mezcal, some veladoras, and a six pack of Modelo Especial from the trunk of the car. We walked over to the thatched roof, open-air structure near the horno, and sat down to talk about Mezcal Union. 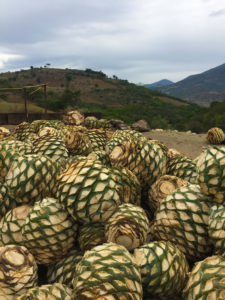 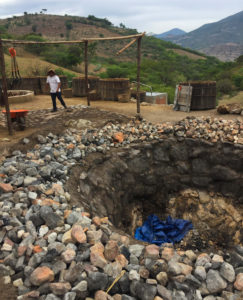 Andres explained that they currently have 14 palenques making Union mezcal and they will likely need to add more soon. The palenque we visited in San Baltazar is his favorite, he told us, and it’s clear to see why. There’s not another building or sign of human life in sight, and its position on the side of a mountain slope gives it a nice gentle breeze that fits the spirits that are made there.

Each of their palenques is hand chosen to make their mezcal. Most are already making mezcal and selling it on their own, and Union is able to offer them the opportunity to make their ensambles (Uno & Viejo) in exchange for use of Union’s financing, resources, and infrastructure. So how do they get a consistent spirit from bottle-to-bottle and batch-to-batch if their mezcal is made in 14 different palenques by 14 different families?

There are several checks and balances in place to ensure consistency of Mezcal Union across their different producers. Here are the big ones: 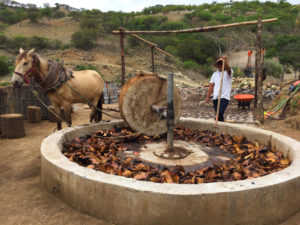 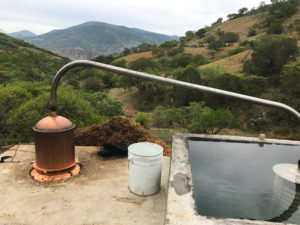 One of the copper stills

Some mezcal purists reading this might cringe at the Solera process, but let’s consider the alternative. Most other brands that reach this level of demand in both Mexico and abroad have taken a very different path. These other brands have opted to begin producing in large, industrial, tequila-like distilleries, which runs counter to what Union initially set out to accomplish. The Solera process allows them to maintain product consistency as well as continue to operate as a collective of individual families and palenques. Andres described himself and his Union colleagues as Social Entrepreneurs, and the Solera process allows them to maintain a high level of social impact.

The last thing that we wanted to discuss with Andres was Diageo. For those who don’t know, Diageo is one of the world’s largest, publicly traded alcohol companies. They own spirits companies across the world, and they just started working as a distributor for Union. When we told a bartender in Oaxaca that we were headed out to visit Mezcal Union, he asked how much Diageo was paying us to write a blog post. To be clear, Diageo is not paying us. In fact, no one is paying us. We’re just like you…we really, really like mezcal.

The partnership between Union and Diageo keeps Mezcal Union in the hands of its founders, while allowing Union to pick and choose which distributors and importers they want to work with across the globe. This increases their ability to introduce new people and new places to mezcal. Andres sees this as a very good thing as it allows them to continue to grow their union of agave farmers and mezcaleros. “If you want to go fast, go alone. If you want to go far, go together,” he told us.

It’s clear when talking to Andres that he cares deeply for the communities in which they work. He’s confident in the positive changes that Union is able to create for everyone involved in each step of the production process. Though their model is new, they’re intent on sticking to their original ideals. The people and communities involved in the production of their mezcal are at the forefront of their plans moving forward.

I just had Alejandro make a presentation with my Diageo rep, and the Union product is excellent, and it was very interesting going through the various steps, talking about the different varieties of Agave used, about the various distillers.

I’m fascinated by the Solera process. I knew that there was a blending process that larger spirits producers used, but never actually looked into the details. Seems like a good way for Mezcal producers to handle growth and promote consistency.

Agreed! The process seems to be something that gives them better consistency without jeopardizing the families they’ve been working with for many years. It’s a win-win.

Excellent write-up! It’s a good thing to be able to look behind the scenes in order to better understand who is doing what – and how – in the world of mezcal. Kudos!