Mezcal Unión Uno uses farm-grown maguey Espadin and wild maguey Cirial. This agave is cut and roasted for four days. The families that produce Union have several generations experience as their main craft. Union uses a collection of different producer-families in the region to produce their bottles. Earlier batches of Union Uno contained a third maguey: Barril.

Union is one of the most commonly found mezcals for cocktails in the US and Mexico. Their story says that when starting the company, an old man told them that the future of mezcal would be based on a UNIÓN. That’s how they named the company, and that’s how they decided to make a mezcal that featured different producer families. Though Pedro Hernandez is their master mezcalero, each bottle is produced by a union of Oaxacan families. There may be slight variations of flavor from batch to batch, but not much, as they are now using a Solera process to ensure better consistency.

In February of 2017, Mezcal Union signed a distribution agreement with Diageo. The agreement keeps the ownership of Union in the hands of its founders, while opening the doors to a wider distribution network. In August 2021 it was announced that Diageo would acquire Union’s parent company, Casa UM, for an undisclosed sum. 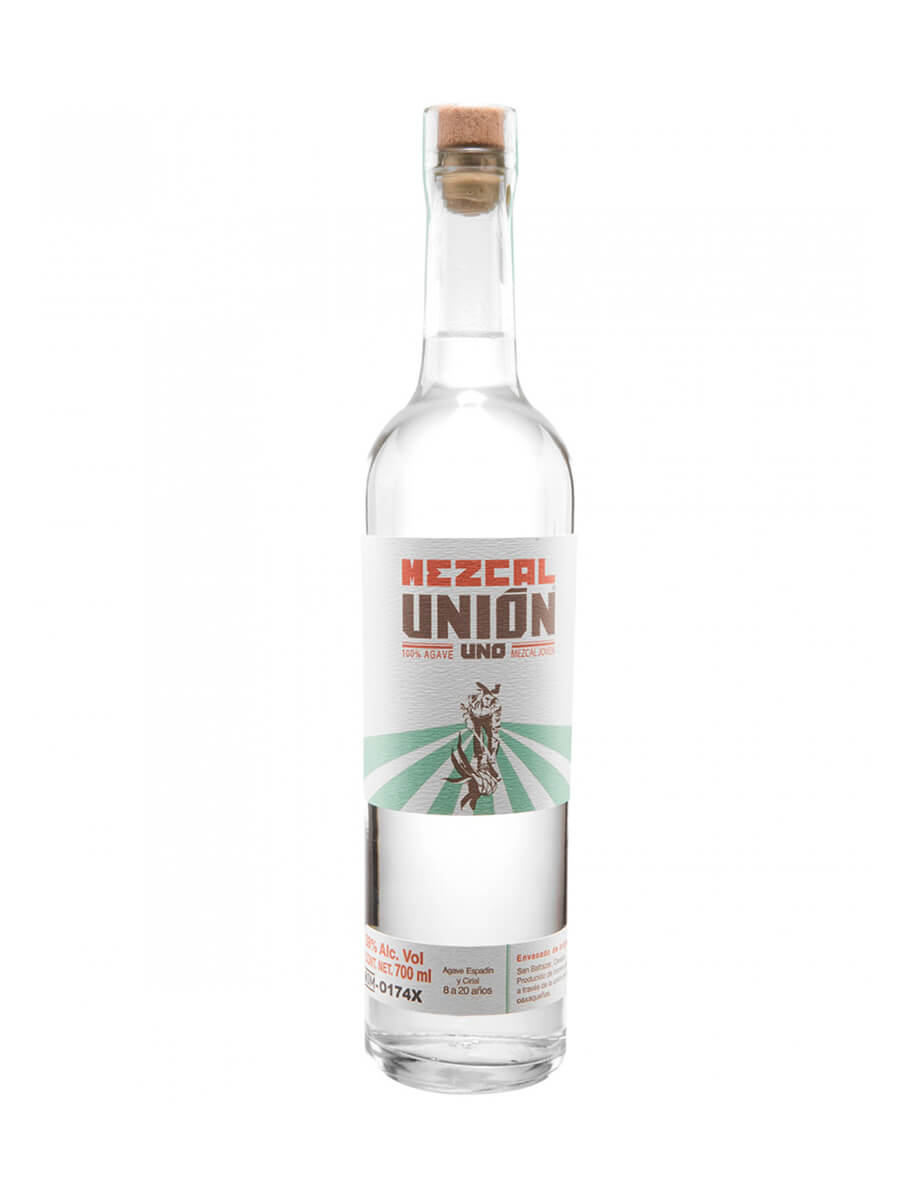 40% Aromas from the bottle are smokey agave with some acetone. Taste more or less follows dominated by smoke and different paint thinner acetone-like flavors with some sweetness at the end

Excellent value for the price point. This mezcal is commonly used in bars for mixing. It has a good smokey, medicinal, vanilla and sweet flavor to it. It’s not as complex as other top shelf mezcals, but it’s pretty good. This would make an excellent entry level Mezcal for those who want to differentiate from tequila. I tried this in a bar margarita and thought it was really good and expected it to be more expensive. Overall I’m impressed and I plan on keeping a bottle around for mixing. Lot: UW-3411

Excellent value for the price point. This mezcal is commonly used in bars for mixing. It has a good smokey, medicinal, vanilla and sweet flavor to it. It’s not as complex as other top shelf mezcals, but it’s pretty good. This would make an excellent entry level Mezcal for those who want to differentiate from tequila. I tried this in a bar margarita and thought it was really good and expected it to be more expensive. Overall I’m impressed and I plan on keeping a bottle around fo

Palate: Smooth smoke all the way through. Vanilla milkshake notes upon entry. Aftertaste has some rubber in there – good though!

The flavors in this 80 proof are balanced and light from start to finish. Extra half star for value.

I had high hopes for this, but sadly, it might be the most disgusting mezcal I’ve ever had 🙁 we really have it a shot, however, I would not recommend this.

My first joven and the mezcal that got me into this incredible spirit. Great in cocktails and as an everyday sipper!

Not a big fan. Is a mixer mezcal. As a mixer the true mystery of mezcal is diluted. Perfect for the year of 2020. Disappointing, but it is what is. And we will appreciate what we have in the moment.

Right there with Vida, Sombra, Casaenemigos.

simply put, this is GREAT for the price point

This one is surprising. Amazing value.

I’ve only found this one when traveling in Colorado. It is incredibly cheap, enough to mix, but you would be surprised when you have it neat. The cirial has a ton of flavor and I wish I could find this one locally. It doesn’t have the same depth as expensive bottles, but this one provides a surprising amount of flavor at its price point.

So drinkable! A little sweet and smoky that goes down smoothly. I honestly wouldn’t want to lose the flavor by adding anything to this except maybe ice.

Lote UUNA150818
Vanila and a bit of smoke. Sweet and watery. Very drinkable.

Batch MKU097. A reliable choice for agave-based drinks as it’s well-priced and won’t dominate the overall taste. But, while it works for sipping as well, it doesn’t provide much excitement. Sweet, floral, piney and well-balanced, it’s also rather light and watery with just a hint of smoke. Innocuous. A good start for a mezcal beginner.

A good intro mezcal. It’s not a brute and also lighter on the wallet, especially for a ensamble.

Aside from Koch Espadin, this is my everyday Mezcal. Much gentler on the palate due to its lower ABV (40° in France) this nice balance between Espadin and Cirial give you everything you want for a sipping Mezcal. Light peppery notes, a bit of freshness and the kick of earthy and smoky feelings that should linger but not overwhelm your palate in any Mezcal.
Definitely a must for beginners and any Smoky Paloma fan out there !

Still the most well rounded, easy to drink Mezcal. Perfect for introducing someone to this delicious spirit.

Buttery vanilla sweetness and floral notes with plenty of smoke. The finish trails off a little soon, and there’s a tendency towards burning alcohol, but not too often and not harsh. Easy sipper, quite good, but not knock-your-socks-off good. Perfect starter.

very nice.vanilla bean and mild black pepper.smooth entry and finish .good mezcal at any price but at 35.00 a bottle,it is a steal.very good sipper.easy to sip on all evening.

Great Mezcal for those whom starting the journey into the Mezcal world.
Well balanced, not to smoky, nice fresh and spicy finish !

Enjoyable mezcal and very well-priced. My top recommended mezcal for those new to the spirit. It’s used in cocktails but decent to sip which makes it versatile. There are notes of vanilla, pine, and citrus. Certain batches have contained barril agave but the ones I’ve tasted are just espadin and cirial at an 90/10 blend. Very smooth and retains nice flavors at 40% ABV. Lot MKU059.

For the price and consistent quality it’s a four star mezcal.

Used mostly for cocktails, though pleasant enough to sip on. Had the usual smoky agave earthiness with pine and citrus as the standout features – perhaps from the Cirial agave that was blended in with the Espadin.

If I could, I’d rate it just below 3 (like a 2.8), because it did seem to lack balance and reminded me too much of Pine-Sol (see pine and citrus reference).

For someone who doesn’t drink mezcal, this was great! Very smooth.

Union is a great go to Mezcal. I love sharing it with friends that are trying Mezcal for the first time!

This is a nice, smooth, sipping mezcal. I like to start with a mezcal like Union Joven before moving on to others.

Smokey mezcal. Good price point for the product. Would order this again.

A brilliant, simple, mezcal. This is a great sipper for a nice relaxing evening… Very clean, mellow, and a light touch of fruit.

Union Joven is a staple in most bars in Texas. I see it everywhere and it’s a great mixer. I’ve also been drinking it neat for several years, and have found that it is very soft and enjoyable. For the price, this is a great mezcal. The blend of agave make this a very easy choice.