Edgar González Ramírez is a first-generation mezcalero from San Cristóbal Lachirioag, Oaxaca. He and his cousin Elisandro Gonzalez founded Mezcal Tosba in the early 2000s with the goal of bringing jobs back to their village. Edgar’s father had distilled sugarcane but his family does not have a history of mezcal distillation. Edgar was an apprentice under a more experienced mezcalero before starting off on his own. He produces mezcal for Mezcal Tosba and aguardiente de caña (rum) under his Dakabend label. In 2019, his aguardiente won Best Rum at Cocktails Spirits in Paris. 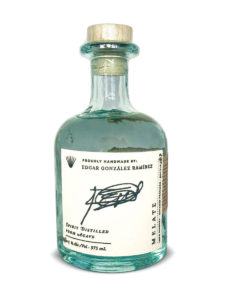